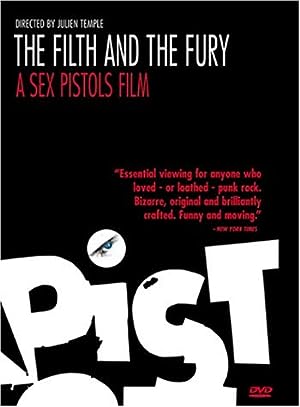 The Filth and the Fury

Synopsis: A documentary about the punk band The Sex Pistols. The film tries to lighten some of the backgrounds of their way through the punk era while telling the story of the band from zero back to zero. Features lots of interviews and comments of folks who were involved.
Genre: Biography, Documentary, Music
Director(s): Julien Temple
Actors: Paul Cook, Steve Jones, John Lydon, Glen Matlock
Production: WARNER BROTHERS PICTURES
3 wins & 1 nomination.

Michael Fish takes a late | look at the weather.

Again, a good deal of cloud.

A little rain from time to time | for much of the day,

and eventually, | I think that rain

will probably turn out to be | fairly heavy.

What you've seen in any | documentary about any band,

before or since, is how great | and wonderful everything is.

It's horrible. | It's enjoyable to a small degree

but if you know what you're | doing it for,

you'll tolerate all that

because the work, at the end | of the day, is what matters.

We managed to offend

all the people we were | fucking fed up with.

The Labour Party, who'd promised | so much after the war

had done so little | for the working class

that the working class were | confused about even themselves

and didn't even understand what | working class meant anymore.

It was cold and miserable.

No one had anyjobs. | You couldn't get ajob.

Everyone was on the dole.

If you weren't born | into money,

then you might as well have kissed | your fucking life goodbye,

you weren't gonna amount | to anything.

The germ, the seed | of the Sex Pistols

Now is the winter | of our discontent

made glorious summer -- | by this sun of York.

England was in a state | of social upheaval.

It was a very, very | different time.

There was rioting | all over the place.

You have to join | the picket line.

There were strikes on every kind | of amenity you could think of.

The TV channels would | go on and off randomly.

People were fed up | with the old way.

The old way was clearly | not working.

There's a little bit | sticking up there.

You can see it | in the reflection.

Ultra Bright | gets you noticed.

you're told by everyone | that you don't stand a chance.

And you should just accept | your lot, and get on with it.

That's where you're gonna get | the social strife.

When you feel powerless...

to retain some kind | of self-respect.

Want something on how many | people have been mugged?

That man is sad | 'cause he's misinformed,

Who's made me a racialist?

This government -- | the conservatives,

and every stingy, | stinking councillor

who sticks up for the n*gger.

And I'll stand by my words,

'cause I don't like these people, | never will do!

Words are my weapons.

Violence is something | I'm not very good at.

I don't think you can explain | how things happen,

other than sometimes | theyjust should,

and the Sex Pistols | should have happened, and did.

We went out in the garden.

Get off your arse!

I was born | in Queen Charlotte's Hospital

And I lived with my mother | and my stepfather

who I thought was my dad, | in the basement

And I slept at the edge | of their bed on a camp bed.

My real dad, he bailed | when I was two.

His name was Don Jarvis. | He was an amateur boxer.

I definitely didn't feel | wanted as a child.

Well, I was born and raised | around West London,

the Shepherd's Bush | and Hammersmith area.

It was typically | working class.

I met Steve 'cause we lived around | the corner from each other.

I went to school | near Paul and Steve,

The Filth and the Fury