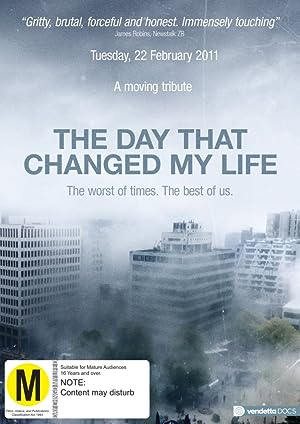 The Day That Changed My Life

I saw one of my colleagues, and he just said,

and that's when I thought,

'Shit. We actually are going down. '

It was so violent that it was actually going

up and down, and I was lifted off the ground.

And then the dust was everywhere, and I remember

it kind of choking me; trying to cough. And then,...

Could see the sky, so I knew

that our building was munted.

As we went for the stairs, we were actually kind of

jumping over bits of the building to try and get down,

and everyone was, you know,

Like, kind of go as fast as you can, cos they

didn't know if another aftershock was gonna hit.

as the building's infrastructure is down.

Our whole building is gone. It's

just smoke and ruin at the moment.

believe I just got out of there alive. '

There's people trapped on the top of our Press

building. The walls have collapsed around them.

The videographer from work, Daniel Tobin, he

Just say what you feel.

Yeah, OK. So if people can-

Tuesday the 22nd of February.

Um, we've just been hit by a devastating

I'm one of the reporters from The Press building.

I was upstairs when it hit. Buildings fell down.

We're out in Christchurch Cathedral Square. As you

can see, people are just gathering round.

We were in the library,

up on the top floor.

The spire of the Christchurch

Cathedral has fallen down.

There's a lot of people in shock.

There were just hundreds of people

'I can't believe this has happened.

I can't believe this has happened here. '

You can see them gathering here

today, hugging each other in support,

trying to get in touch with people they love to tell

them that they're safe or ask if others are safe,

but there's no communication in and out of

central city of Christchurch at the moment.

All phone networks were down.

There were no ambulances.

There were no police.

There were no officials.

There's people killed in this.

You were just faced

with a broken city.

Are there people in there?

Have a look around. Do something!

People are just roaming round, just distraught. No

one knows what to do or where to go at the moment.

It's hard to explain, really.

Comms, CHO4. When there's an opportunity, we

could do with an ambulance and St John's staff.

We've got quite a few

We had lots of conflicting

The problem was communication

Try to stop all the bleeding.

I've got a critical here.

You start to build a mental picture, and

you think that this is quite catastrophic.

throughout the entire city.

hold on, hold on!

At that point - right at that very point - my

day that I knew was gonna be changed forever.

You have, you know, the choice to either blend

into the background or take on a leadership role,

The Day That Changed My Life