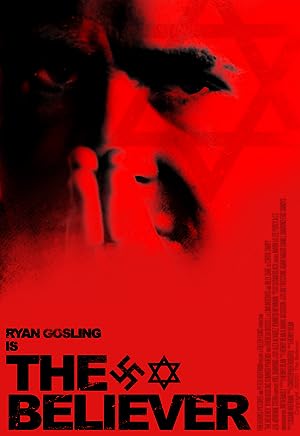 Synopsis: "The Believer" explores a Jewish student's private journey to understand the meaning of Judaism in his life. Set in New York City, the Plot follows a morally confused young adult struggling with the conflict between his beliefs and his heritage. "The Believer" examines themes of religion, family, and self-loathing. It is a psychological examination into the forces of intolerance, both on the individual and society as a whole.
Genre: Drama
Director(s): Henry Bean
Actors: Ryan Gosling, Peter Meadows, Garret Dillahunt, Kris Eivers
Production: IDP Distribution
6 wins & 10 nominations.

And it came to pass after these things|that God tested Abraham...

..and go unto the Iand of Moriah|and offer him as a sacrifice...

(boy) It was a test of Abraham's faith|and devotion to God.

As usuaI you have something to add?

(Danny) It's not about his faith,|it's about God's power.

God says ''You know how powerfuI I am?''

''I can make you do anything I want,|no matter how stupid. ''

''Because I'm everything|and you're nothing. ''

Where do you think this is?

Did you fuckin' trust?!

Your God's gonna provide a fuckin' ram|instead of you? No!

Do me a favour.

It wiII no Ionger be true that the country|has a unified set of core beIiefs.

We wiII cease to be a nation|in the traditionaI sense...

..and become instead a confederation|of interest groups...

At the same time, we wiII fIow into|the anonymous sea of the gIobaI market.

The economic advantages are obvious,...

Where l grew up in South Boston,...

..when a kid walked down the street,|everybody knew his name.

He runs out in front of a car, someone says|''Jimmy Dunn, get back on that sidewalk...

After high school, he sees his uncle|at the gas works or the shipyard,...

..he gets his apprenticeship.

..he's got four kids,|he's playing ball and going from...

Today, that kid walks down the street,...

..it's filled with trash,|half the faces are black,...

..the shipyard's closed, only jobs left|at the gasworks are set-asides.

And by the time he drops out of high school,|he'd rather get a job at the Burger King.

So he drinks, does crack, whatever.

When he hangs himself at 23, the only|people mourning him are his buddies...

The soul of this country...

And the only thing this government|can offer us is free trade, mutual funds,...

..is crushed less by accumulated wealth|than by lack of leadership,...

..and a sense of emptiness|he simply cannot fill on his own.

That's why l'm a fascist.

lt's the only form of government that|can address our fundamental needs.

This isn't the time for that.

l think race is central to everything|we're talking about.

Spiritual life comes from race, the blood.|Without that, we're no better than the Jews.

What's wrong with the Jews?

The point is,|the modern world is a Jewish disease.

They're obsessed with abstraction.

So what would you propose, then?

That would be a catastrophic mistake.

- People hate Jews, do you agree?|- They used to. Today that's not an issue.

Deep down, beneath all the tolerance|they learn on television, nothing's changed.

And it's not even hate.

lt's the way you feel when a rat runs|across the floor. You wanna step on it!

You just wanna crush it. You don't even|know why. lt's a physical reaction...

Henry Bean (born 1945) is an American screenwriter, film director, film producer, novelist, and actor. Most famous as a screenwriter, Bean wrote the screenplays for Internal Affairs, Deep Cover, Venus Rising, The Believer, Basic Instinct 2 and Noise. The Believer was awarded the dramatic Grand Jury Prize at the 2001 Sundance Festival and the Golden St. George at the 23rd Moscow International Film Festival.Bean, who is Jewish, also acted in The Believer, and was a producer on Deep Cover and Noise. He was the director for The Believer and Noise. Bean is also the inspiration for the protagonist of Noise. He was so tired of constant noise around him and his home in New York that he decided to take the law into his own hands. If a car alarm was going off and the owner of the vehicle didn't rectify the situation, Bean would break into the car to disable the offending car alarm. Bean was eventually arrested and jailed. He admits to doing it a few more times since. more…

Discuss this The Believer script with the community: