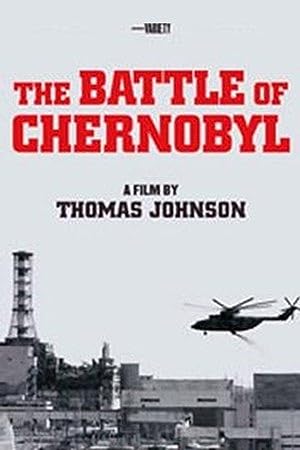 The Battle of Chernobyl

Synopsis: On April 26, 1986, a 1,000 feet high flame rises into the sky of the Ukraine. The fourth reactor of the Chernobyl nuclear power plant just exploded. A battle begins in which 500,000 men are engaged throughout the Soviet Union to "liquidate" the radioactivity, build the "sarcophagus" of the damaged reactor and save the world from a second explosion that would have destroyed half of Europe. Become a reference film, this documentary combines testimonials and unseen footage, tells for the first time the Battle of Chernobyl.
Genre: Documentary
Director(s): Thomas Johnson
Actors: Tim Birkett, Hans Blix, Mikhail Gorbachev, Oleg Mirochnikov

A beautiful spring day for the 43,000 inhabitants of Pripyat, in the Ukraine.

A day that will remain forever engraved in their memory.

3 kilometers from the city - the Vladimir Ilyitch Lenin nuclear power plant where several thousand people go to work each day.

Tonight, the 176 employees of block 4 have been ordered to carry out a test on a self-fueling system of the reactor.

Something that could save energy.

At 1:
23 a.m., the security systems are deactivated and the experiment begins.

A series of detonations go off in the core of the reactor.

While Pripyat sleeps peacefully, the floor of the plant begins to tremble.

The 1200 ton cover of the reactor suddenly blasts into the air.

An ultra-powerful stream of radioactive vapor releases uranium and graphite over hundreds of meters around the plant.

From the gaping hole, a spray of fire charged with radioactive particles in fusion shoots a thousand meters into the sky.

There were a lot of colors and they were really bright: orange, red, sky blue.

The most serious nuclear accident in history has just taken place.

During the night, early in the morning,

l got the call around 5 AM.

l was told there'd been some accident at the Chernobyl nuclear plant.

The first firemen on the scene battle the fire without the adequate protective gear.

They pour tons of water ON this strange fire.

But nothing seems capable of putting out.

They are all exposed to lethal doses of radiation.

Two men die that night, 28 more will follow in the next few months.

They are the first victims of Chernobyl.

Nobody was prepared for such a crisis.

For the next seven months, 500,000 men wage hand to hand combat with an invisible enemy.

A ruthless battle that has gone unsung which claims thousands of unnamed and now almost forgotten heroes.

Yet, it is thanks to these men that the worst was avoided: a second explosion,

ten times more powerful than Hiroshima, which would have wiped out half of Europe.

This was kept secret for twenty years by Soviets and the West alike.

Many of these images have never been seen before.

They were taken by journalists who were also exposed to nuclear contamination, some whom later died.

Those images tell the story of a hidden war whose consequences continue twenty years later to worsen the toll of the disaster.

This is the true story of the Battle of Chernobyl.

By early morning the clouds are already being contaminated by the radioactive column rising one thousand meters into the sky.

Igor Kostine is a photographer with the news agency Novosti.

When a friend and helicopter pilot phones him that morning to offer to fly him over Chernobyl,

all Kostine knows is that something has happened at the plant during the night.

He is the first journalist to witness the gaping hole.

When we got close to block 4 and circled round it, I had no idea of the risk.

When we flew over the block, I opened the window of the helicopter.

I didn't realize then what a big mistake that was.

The thin translucent smoke he sees rising from the ruins is in fact highly radioactive.

Kostine is one of the few Chernobyl reporters on the scene in the early hours of the accident, to had survived serious explosion to radiation.

When I opened the window, I couldn't hear a thing.

The ruins of the reactor were below me.

I felt like I was floating in the space.

I couldn't even hear the helicopter anymore.

A tomb and deathly silence.

This is the first picture ever taken of the breach.

Discuss this The Battle of Chernobyl script with the community:

The Battle of Chernobyl