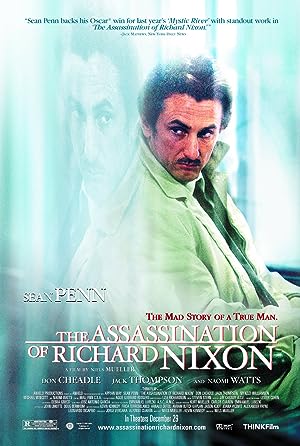 The Assassination of Richard Nixon

Synopsis: Fact-based story about a disturbed office furniture salesman who in 1972 concocted a plot to kill then-President Nixon by hi-jacking a plane to fly over the White House to drop a gas bomb. At the start of the movie, the man is separated from his wife and stressed in his job where he is made the butt of jokes and is an under-performer. Attempts to get his brother's old tire business resurrected with a black partner is rejected by the banks. When he is officially served with divorce papers, everything comes apart and Richard Nixon's broken promises comes to represent all the evils that have come down on him. A news story about a pilot that landed a helicopter on the White House lawn gives him the idea for his attack. Bolting onto a Baltimore plane, he attempts the hi-jacking.
Genre: Biography, Crime, Drama
Director(s): Niels Mueller
Actors: Sean Penn, Naomi Watts, Don Cheadle, Jack Thompson
Production: ThinkFilm
2 wins & 4 nominations.

Just tell them that.

Tell them my reasons.

I have the utmost respect for you.

is both pure and honest.

And that is why I have chosen you...

to present the truth about me to the world.

My name is Sam Bicke.

And I consider myself a grain of sand.

On this beach called America...

three billion on the beach we call Earth.

the action that I am about to take...

will show the powerful...

the least grain of sand...

the power to destroy them.

These come in brown?

We do have that in a brown.|And a harvest gold. And an avocado.

Give me three of the brown and an avocado.

This is a Naugahyde,|very good for avoiding stains.

I can't sit on this plastic stuff.|I get sweaty and stick to it.

This doesn't come in leather, huh?

Bill, what our new associate's trying|to explain, I think is...

that this is leather|with a Naugahyde coating.

Exactly. Comfort of leather.|Just a little easier to clean.

No extra cost. How does it feel?

- You know what you look like sitting there?|- What?

You look like the boss. Are you the boss?

I got my own place.

What did I tell you?|Did you write the gentleman up, Sam?

Write the gentleman up.

Can we deliver this for you Monday,|or is Tuesday better?

there are times that I have felt alone|on this planet.

And that's how they want us, isn't it?

You smell something? I do.

I smell success. And you've got the odor.

Why do I say that to you, Sam?

Well, I certainly am trying.

Got nothing to do with trying. It's believing.

When you believe in what you're selling,|you succeed.

Because then you're not selling.|You see what I'm saying?

You're talking from somewhere here.|You've got to believe.

I can believe in anything.|Isn't that right, Marty?

You want to know who|the greatest salesman in the world is?

That man, right there.

And what was Nixon's sales pitch in '68?

He said he would end the war.

He would get us out of Vietnam.|And what did he do?

and then he bombed|the living shit out of them.

That's what he did.|Now, what did Nixon run on last year?

Ending the war in Vietnam. And he won.|By a landslide.

That is a salesman. He made a promise.|He didn't deliver.

And then he sold us|on the same exact promise.

All over again. That's believing in yourself.

These are for you. Read them.

These, you listen to.

While you're taking a shit in the morning.

This book right here will really teach you|to believe in yourself.

These will make you a salesman.

Remember, power is a state of mind.

You have as much as you think you have.

If you don't think you have any, you don't.

Talk about yourself as you see yourself.

And someday that will be yourself.

The salesman must see himself as a winner.

Discuss this The Assassination of Richard Nixon script with the community: