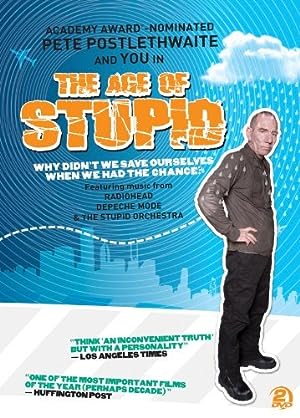 The Age of Stupid

Synopsis: This ambitious documentary/drama/animation hybrid stars Pete Postlethwaite as an archivist in the devastated world of the future, asking the question: "Why didn't we stop climate change when we still had the chance?" He looks back on footage of real people around the world in the years leading up to 2015 before runaway climate change took place.
Genre: Documentary, History, War
Director(s): Franny Armstrong
Actors: Pete Postlethwaite, Jeh Wadia, Alvin DuVernay, Layefa Malini
Production: New Video Group
1 nomination.

Welcome to the global archive,

It contains the artwork

from every national museum.

There are pickled animals

stack up two by two.

Every film, every book,

all stored on banks of servers.

But the conditions we are experiencing now,

were actually cause by our behavior

In other words, we could've saved ourselves

We could've saved ourselves.

But we didn't, it's amazing!

What state of mind were we in,

to face extinction, and simply shrug it off?

By nature or by disinterest,

there is always an introvert.

For years, you know,

the non-business need, need a face

he started up India's

Time for India's now, the time for

developing business in India is now.

have never set foot on an airplane.

What are the different kinds of

Why are you scared of a little smoke?

Do want to be scared and run of fire?

It's not a toy, it's not a perfume bottle,

I was at London at the time, where Stelios Haji-loannou,

you know, uh, he created the EZ jet,

and I was fascinated with

basically how he did it.

We've been offering fares from 600 rupees

How many people can afford a 1 rupee fare?

I would imagine every single Indian can.

That the, a rickshaw driver

having a elite class who can fly in

a country of a billion people, it's ridiculous.

climate change leading up to 2010.

it's the hottest day ever recorded.

Now, it's official, the past year has

been the driest in Melbourne's history.

The dessert is advancing at

the phenomenal rate of 3 miles every year.

collapsing faster than anyone predicted.

a half million people are affected.

At 82, Fernand is the oldest

All his lifetime he witnessed

huge changes in the mountains.

extension on the bottom here.

Extraordinary to think that

these are the Alps in December.

Here in Chamonix is across the Alps,

there's a dramatic lack of snow

It is a glimpse into the future.

More than half of ski resort in Europe could

shut down in the next 50 years because of global warming.

So nobody goes skiing, big deal. The thing

is it's not bad, is it? That's the whole point.

The fact you can't get skiing anymore or

the glaciers are melting is not really the point,

the point is that signals that

basically the earth is destabilizing.

And all the norms that have

allowed life to exist are changing.

major events, up to the present day.

This is a couple of days

Most people are following the evacuation

order in getting out of the city.

had no intention of moving.

I got up at Saturday morning and

there's a buzz in the neighborhood,

everybody were running around and

You know, the hurricane's coming.

I checked on the web and sure enough all of

the models had it, aiming right for us. Bulls eye.

Franny Armstrong (born 3 February 1972) is a British documentary film director working for her own company, Spanner Films, and a former drummer with indie pop group The Band of Holy Joy. She is best known for three films: The Age of Stupid, a reflection from 2055 about climate change, McLibel, about the McDonald's court case and Drowned Out, following the fight against the Narmada Dam Project. Armstrong pioneered the use of crowdfunding for independent films and developed an innovative form of film distribution known as Indie Screenings. Her most recent project is the carbon reduction campaign 10:10 which she founded in the UK in September 2009, and which is now active in more than 50 countries. On International Women's Day, 8 March 2011, she was named as one of the Guardian newspaper's "Top 100 Women", in a list which included Aung San Suu Kyi, Gareth Pierce, Doris Lessing, Arundhati Roy and Oprah Winfrey. Her father is the pioneering TV producer Peter Armstrong. more…

The Age of Stupid