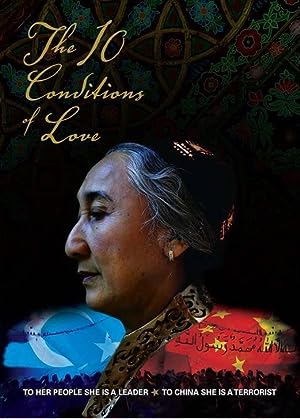 The 10 Conditions of Love

Synopsis: The 10 Conditions of Love follows the personal and political struggle of Rebiya Kadeer, the most galvanizing leader of the Uyghur people in 60 years. The Uyghur are China's Muslim minority. From poverty to wealth, protest to imprisonment, Rebiya now lives in exile in the United States. Here she is quickly gaining influential friends and media coverage to help her campaign for her people's human rights. As a result, her children are in prison in China This is a story about the ruthless oppression of 20-million people; of Super Power politicking; and of the pain of a deeply loving family torn violently apart.
Genre: Biography, Documentary, History
Director(s): Jeff Daniels
Actors: Rebiya Kadeer
1 win & 1 nomination.

China is trying to strangle

my people in their cradle...

and kill them before their

They said the Chinese

how dangerous it would be...

from receiving the Nobel Peace Prize.

Omar Kanat, you always give me great ideas.

I always use some of your words

when people interview me.

Firstly, it says my country is

While I am a Uyghur leader, I will

never use such a word in an article.

I'd rather not publish such an ugly article

it is a betrayal and insult to the Uyghur

Listen, laws work for you in America.

Say that a solution to the East Turkestan

problem is a solution for Central Asia.

Didn,t you talk about the importance

of Uyghurs and Eastern Turkistan?

I did say those things.

Why can,t you all just come to my house?

It's only an hour away, right?

Come straight to my place.

Well, then I'll pick you up at your place.

Go to bed. You have school tomorrow.

Elyar, can you go get me

a blanket from the other room?

in the Northern region of East Turkestan.

In summer, we swam in the rivers...

and rode the horses.

We picked flowers from the mountains.

The environment was beautiful then.

When the Communist Liberation Army

they played a really smart game.

and positioned them at the front of the

to applaud the army,s arrival

You see, in the beginning, the soldiers

They used to treat people who were sick.

They did a lot of good things.

they started to make demands.

They said all Uyghurs who are rich

are devils and are taking money

They told us these Uyghurs must be

Rich Uyghurs were executed in every village.

Any Uyghur who spoke out

was killed or imprisoned.

The government implemented a plan...

to spread us throughout

our homeland to separate us.

My father was branded as a capitalist.

Therefore, when I was a young child,

we were forced to move south to Aksul.

So to control the Uyghurs, they

disempowered them, made them poor.

Second, they gave them no proper education

and third, they took their religion.

At this point, Uyghurs began to open their

But it was too late. They were already

Every time there was a resistance, I wanted

to be a member and join their movement.

I was proud of them, of what they were doing.

They were my heroes.

At this time my ex-husband,s

He earned only seven dollars a month.

I had six kids, I couldn't live on this.

So I began to secretly embroider

designs on kids shoes and clothing.

As my ex-husband was a communist

the government bank where he worked

pressured my husband to divorce me.

I experienced much hardship

when I started my business...

as people didn,t have respect for me.

But I proved them all wrong.

I travelled through many villages...

and saw the poor state of my people.

As I became more successful,

I understood why the Chinese government...

you can,t organise with others...

Jeffrey Warren Daniels (born February 19, 1955) is an American actor, musician and playwright whose career includes roles in films, stage productions and on television, for which he has won an Emmy Award and received Golden Globe, Screen Actors Guild and Tony Award nominations. Making his film debut in Ragtime (1981), Daniels's film credits include Terms of Endearment (1983), Arachnophobia (1990), Gettysburg (1993), Speed (1994), 101 Dalmatians (1996), Fly Away Home (1996), Pleasantville (1998), The Hours (2002), Good Night, and Good Luck (2005), The Lookout (2007), Infamous (2006), Looper (2012), Steve Jobs (2015), and The Martian (2015). Daniels is also known for playing Harry Dunne in the buddy comedy Dumb and Dumber (1994) and its sequel Dumb and Dumber To (2014). He received Golden Globe Award nominations for Best Actor for his performances in The Purple Rose of Cairo (1985), Something Wild (1986) and The Squid and the Whale (2005). Daniels has received a number of award nominations for his work on stage, including Tony Award nominations for Best Actor for his roles in the plays God of Carnage and Blackbird. He is the founder and current executive director of the Chelsea, Michigan-based Purple Rose Theatre Company. From 2012 to 2014, Daniels starred as Will McAvoy in the HBO political drama series The Newsroom, for which he won the 2013 Primetime Emmy Award for Outstanding Lead Actor in a Drama Series and received Golden Globe and Screen Actors Guild Award nominations. more…