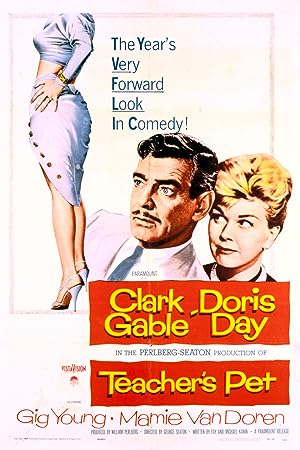 Synopsis: James Gannon, the hardboiled city editor of a newspaper, believes that the only way to learn the business is by way of the School of Hard Knocks, and has a very low regard for college-taught journalism, so he's not pleased when his managing editor orders him to help Erica Stone, a college professor, with her journalism class. Finding himself attracted to her, he pretends to be a student in her class, not revealing he's Gannon, whom she despises. As they bob and weave around their mutual growing attraction, they both begin to gain respect for each other's approaches to reporting news, but how will Erica react when she finds out who he really is?
Genre: Comedy, Romance
Director(s): George Seaton
Actors: Clark Gable, Doris Day, Gig Young, Mamie Van Doren
Production: Paramount Home Video
Nominated for 2 Oscars. Another 7 nominations.

Now you can see the eleVators|leading up to the executiVe offices.

And now if you'll just get up|a little closer to the table...

you'll all be able|to View this room quite well.

This, ladies and gentlemen,|is the City Room...

the heart centre of eVery newspaper.

Here you see only a handful...

of the 2,500 highly-trained specialists|employed by the Evening Chronicle.

Men and women who work tirelessly...

not only in this Vast building,|but in eVery country in the world.

who become your eyes and ears|in war and peace...

who make it possible for you|to sit in your chair...

and witness history in the making.

Men and women who uphold the highest|tradition of American journalism...

and are dedicated to the task|of making you...

the best-informed newspaper reader|on this earth.

These are some of the papers you saw|printed only a few minutes ago.

The first copies are rushed up...

to be distributed|to the editors and reporters...

so they can be checked|in case there are any mistakes.

In this department, the news of the city|is funnelled through the City Desk-

Which one's the city editor?

I'll get to that in a moment, madam.

Headed by the city editor|who's seated there...

in the centre of the room...

At the far end of the room|is the office of our Managing Editor...

whose name is Lloyd Crowley.

And down the hall, Col. J.R. Ballantine,|our publisher.

And now, ladies and gentlemen,|what you may find of interest next...

is what we term|in newspaper parlance the morgue.

I'll be Very happy|to show you what we haVe.

Mr. Gannon, could I talk to you-

I don't care what his brother thinks.|It won't sell a paper.

Get me a quote with lace on it.

I don't know how you got in here|or who you are, but I'Ve got a-

I'm Mrs. KoVac. My Barney|works for you. That's who I am.

Some dame tried to commit suicide|oVer a guy.

That's the business to be in:|sleeping pills.

You want to send a cameraman?

Depends on who she is. Find out-|Wait a minute.

He says they pumped out her stomach,|and they only got a quart of bourbon.

That's not a bad business either.

- In that case, no pictures.|- I'Ve been trying for weeks to see you.

I can't get you on the phone.

I haVe to take a tour.|What are you, the President?

We'Ve got a paper to get out,|and your boy helps us do it.

Do you want me to start him|as managing editor?

I want you to fire him.

'Cause I want him to get educated,|what for.

So did his father.

in an oVercoat factory|on SeVenth Avenue.

He took a dictionary with him eVery day|in his lunch pail.

God rest his soul, he said:

"You get Barney educated.|That's the golden key. "

This is okay. Andrews'll get you|quotes from the Deputy Mayor...

and you and he can|get together on a sidebar.

- Did you hear what I just said?|- Certainly.

He took the dictionary with him|eVery day in his lunch pail.

Discuss this Teacher's Pet script with the community: