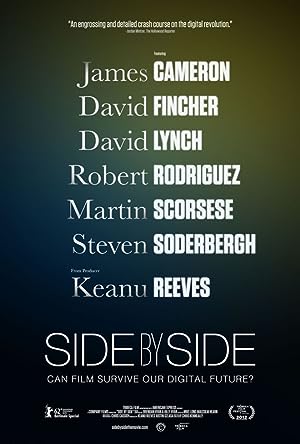 Synopsis: Investigates the history, process and workflow of both digital and photochemical film creation. It shows what artists and filmmakers have been able to accomplish with both film and digital and how their needs and innovations have helped push filmmaking in new directions. Interviews with directors, cinematographers, colorists, scientists, engineers and artists reveal their experiences and feelings about working with film and digital. Where we are now, how we got here and what the future may bring.
Genre: Documentary
Director(s): Christopher Kenneally
Actors: Derek Ambrosi, Michael Ballhaus, Andrzej Bartkowiak, Dion Beebe
Production: Tribecca Film
1 nomination.

Since the late 1880s, visual artists and storytellers have

You ain't heard nothing yet.

Movies have inspired us...

I have something more than a hope.

Thrilled us, and captured our imaginations.

Film has helped us share our experiences and dreams.

Photochemical film has been the exclusive format used to

capture, develop, project, and store moving images for over 100 years.

challenging film's place as the gold standard for quality and work flow.

Digital technology is evolving to a point that may very well

replace film as the primary means of creating and sharing motion pictures.

The documentary we're doing is called side by side, and it's a

documentary about the science, art, and impact of digital cinema.

a kind of threshold tipping point.

In this conversation, in this kind of intersection of time,

We've kind of come to this place where- is it the end of film?

Where are we today?

It's exciting because it's a reinvention of a new medium.

If the photochemical process has worked its way through our culture,

we're on to another level.

And how do you use it to tell a story?

How do you use it to paint a picture?

Are you done with film?

Digital cameras are the new aesthetic that's coming to cinema,

and at the same time, we're going to mourn the loss of film.

I am constantly asked to justify why I want to shoot

a film on film, but I don't hear anybody being asked to justify

why they want to shoot a film digitally.

I wanted whatever I could imagine to be something that we could realize.

just couldn't do with film.

an inferior way starting to take over film.

I'm not gonna trade my oil

paints for a set of crayons.

There will be people who will

the golden egg but they'll sodomize it first.

If the intention is that digital is gonna replace film,

I would be sad if it didn't

They process digital now to

Just- we like the way it looks better, which seems kind of arbitrary.

It's just what we're used to.

Film is a 19th century invention.

We are at the top of the photochemical process.

This is about as far as it's ever gonna go.

Digital is here now, but it's gonna keep going, and you got to

be a part of that.

Who's gonna be a part of that, dictating where that goes?

I don't think it's to the advantage of anybody to totally eliminate film.

There are gonna be many of us that are gonna fight for film,

that are gonna fight for the experience of shooting on emulsion.

This is a potentially either scary thing or a very liberating thing.

One of the first steps in the

the images in camera.

The director, actors, cinematographer, and the entire

production team work together to

bring the script to life.

the director of photography or

DP, helps the director achieve the look of the movie.

The DP is responsible for

knowing what equipment is needed

and how it works in order to