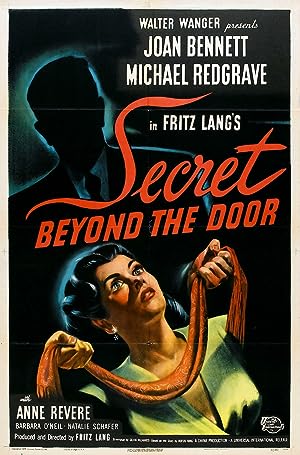 Secret Beyond the Door...

Synopsis: In this Freudian version of the Bluebeard tale, a young, trust-funded New Yorker goes to Mexico on vacation before marrying an old friend whom she considers a safe choice for a husband. However, there she finds her dream man -- a handsome, mysterious stranger who spots her in a crowd. In a matter of days they marry, honeymoon and move to his mansion, to which he has added a wing full of rooms where famous murders took place. She discovers many secrets about the house and her husband, but what she really wants to know is what is in the room her husband always keeps locked.
Genre: Drama, Film-Noir, Mystery
Director(s): Fritz Lang
Actors: Joan Bennett, Michael Redgrave, Anne Revere, Barbara O'Neil
Production: Universal Pictures

I remember, long ago I read a book

that told the meaning of dreams.

she will reach a safe harbor.

But if she dreams of daffodils,

she is in great danger.

But this is no time for me to think of danger,

this is my wedding day.

Something old, something new,

Something old is this church -

Mark says it's a felicitous structure.

...its altars, its chandeliers,

tuned to a perfect harmony.

Built so that here

only events of joy can happen -

And something new is Mark himself.

And love is new for me.

My heart is pounding so...

the sound of it drowns out everything.

It's said that when you drown your whole life

Here it is in twelve point bold.

My young, gaudy sister has

Darling, I never dreamed of marrying him!

I'd sooner see you marry that

Chit chat aside, what are you holding out for?

I still have time, Rick -why should

I tie myself down?

I'm not trying to rush you but, you know,

being mother and father

and check signer for you has its

Today, New York's a bull market for you

Are there any as good as you, Rick?

- I wasn't proposing a miracle.

But I won't be around as long as you, Celia.

They don't make spare parts for this

and mine has a lot of milage on it.

Your secretary said I could...

Hey, hey. Come in, Bob. This is strictly legal.

Speak of the devil, Celia: Here is a

and a top lawyer - Bob Dwight.

My brother Rick. That was the last time we were

close -and when you died, Rick, life was lonely.

Rick was a cagey investor, but now that it's your

No-one but you can touch the capital,

unless you revoke the trust - not even

Has a fortune-hunting husband popped up?

- The woodwork is crawling with them, you know

And when you're settled I'm going to

ask you to marry me.

being the darling of the stag line.

I don't want an answer now, Celia. You're

It's only been two months and...

- Potter's asked you to go to Mexico with him.

Why don't you take him up on it?

Will you come too?

- No. Call it your last fling.

I'll still be here when you come back.

Alright. The initials are R.D.

I nearly married a man once who was the

only he broke our engagement simply

because he found out that I...

Celia, let's get out of here.

I don't want to be an innocent bystander.

Celia, come on, come on.

What's wrong with you?

There was nothing wrong with me,

but I was strangely held.

I'd seen fights before - nightclub brawls,

a fist-fight over a cigarette girl.

When one man was knocked down,

the fight was over. But this was different:

A woman and two men

who may have known her an hour or less

fighting for her with naked knives.

Death was in that street

and I felt how proud she must be.

Suddenly I felt that someone was watching me.

There was a tingling at the nape of my neck

as though the air had turned cool.

Silvia Richards was a screenwriter who worked on a number of films in the 1940s and 1950s, including the film noir Ruby Gentry and the Western Rancho Notorious. She also wrote for television in the 1950s and early 1960s. more…

Secret Beyond the Door...