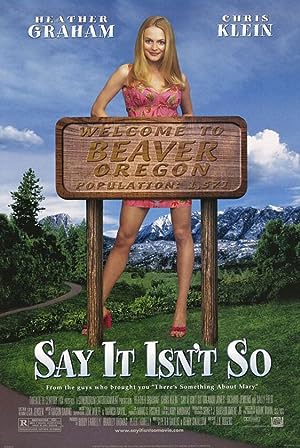 Say It Isn't So

Looking at this picture,

If indeed you were, I'd have to disagree.

Truth is, when you stop to ponder it,

there's really no such thing as a lonely place,

You can be lonely any place:

up on a rooftop, at a big family shindig,

in a football stadium,

or even in a small town,

there's anything wrong with it.

In fact, loneliness is what ensures

the propagation of our species.

I think that's why most people get married.

But mostly cos they're just damn lonely.

Of course, that is one hell

of a milk-toast reason

to link up with one person

for the rest of your existence.

But people do it every day.

They give in to their loneliness.

And the next thing they know,

Perhaps I'm being too picky.

I talked to this counsellor once.

He told me that the fact

I was raised in an orphanage

has rendered me afraid of abandonment,

and therefore fearful of commitment.

Now, you can tell by my tone,

I don't think much of his opinion.

I'm ready to commit, just as soon as I find

that one woman I can't live without.

That one woman that gives

me goose bumps all over.

I simply refuse to settle for anything less,

Be a sport, will ya?

and she's makin' my life hell in a handbasket.

I know she'll go easier on me if you're there.

Come on now, Gilly. Do me this.

- Bring her a puppy, Larry. She'll love that.

- What the hell is this?

It's a Russian Pomeranian, Larry.

Be a friend. Come on over.

A slice of family life and home cookin' will do

We'll make it a wingding.

This is fine cuisine, Mrs P.

- That's why he never comes home for dinner.

- I'm out there busting my ass.

If you're busting your ass, how come

it's the size of a goddamn beanbag chair?

If you put out once in a while, maybe I

All right! Call me old-fashioned,

but I don't think a child should be made

to picture her parents humping.

- I don't tell you about my sex life.

- You're not having sex.

- Are you having sex?

She doesn't even have a boyfriend.

You don't need to have a boyfriend

to be having sex.

I'm just saying that a boy doesn't have

to be a friend to be nibbling my package.

He doesn't have a girlfriend,

but I'll bet he's having sex.

Well, occasionally, sure, but...

Well, ultimately I believe in

waiting till one is married before...

How come you don't have a girlfriend? Dad

says you're confused about your sexuality.

- I believe the term he used was "fagnostic".

She's just repeating what you said.

You always take her side!

You let her get her ears pierced.

- I got my ears pierced because I like it, OK?

And I got these pierced because I hate you!