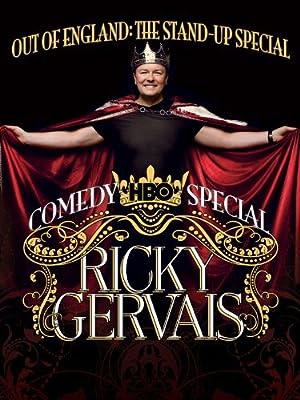 And now, the main event of the evening.

He is co-author of the most successful British comedy of all time,

broadcast in more than 100 countries,

and has sold over 7 million DVDs.

And now, is the fastest-selling live tour in British history.

So, please, let's welcome on stage

Thank you. Thank you very much.

Not too exaggerated, right?

I spent entire budget it.

It's just me and the microphone now.

Not even makeup are not. Incredible.

It is fantastic to be here, at mre city in the world.

This is my second night here in New York. I had a few small shows in Los Angeles, but ...

most earnings there I gave the American Cancer Society.

This is better, because you keep all ... money.

We managed to raise thousands of dollars or one hundred pounds, as you prefer.

As to trii in a third world country?

I know what you're thinking. Ricky Gervais Still busy with charity? May tcei!

"As we gathered last year, only for cancer?"

It does not matter. For what?

And I hope to be welcomed.

If I ever make cancer, I will go into the nearest hospital and have to say,

"Well, I paid for that equipment,

Last year I thin a show for teenagers with cancer.

But they called me again last year.

There is a nice show.

Adolescents with cancer have free entry.

It brings up to the forefront, lucky them ...

And I can come backstage after the show to meet me.

How great it can be for them.

Much better than to go to Disneyworld, where they can be bad, given their state.

I look and I recognize one of them. It was two years ago backstage.

He told me about his illness, and I've signed some autographs you,

The khan of the of ce naiba adolescent and Inca?

Not lie in respects of cancer, and it hurt when he laughed, but it would be ...

the decision and the IMI continuam spectacolul rdea the rdea, "Da, Razi you ..."

I seethed with anger.

And when I'm tired, I said "Dude, you recognize."

"Ai culise needle comes in 2 of the anus."

Although they got a little hard at first,

then caught and they ...

Scotei it out! And to room started to boo.

But we want to know that is large box, not that I am a dwarf.

I thin a show charity last year for autism.

And like most, my only experience related to autism, until recently,

he was Dustin Hoffman i know prestaia extraordinar din "Rainman".

I recently purchased a new home in London

and neighbors are all walking around there ...

"When I raise my high fence, you can go to hell."

And a couple had a son with autism.