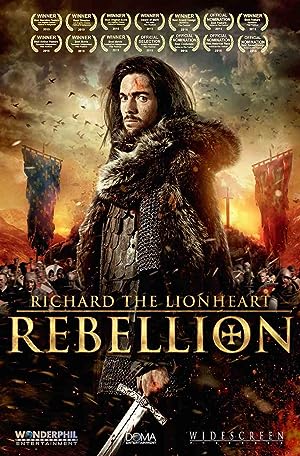 Synopsis: The year is 1173. England and France are at war. The destiny of the two great powers has never been so intertwined. As King Henry's wife, Queen Eleanor, is captured and imprisoned by the king himself, Richard and his brothers lead the fight against their father in a heartless war. Allegiances shift with each victory or defeat as the destinies of England and France keep swaying in a delicate balance.
Genre: Action, Adventure, Drama
Director(s): Stefano Milla
Actors: Valeri Alessandro, Elisa Allara, Lucia Allara, Derek Allen
5 wins & 3 nominations.

Europe was divided between the two great powers,

The children of the King of England, Richard, Henry and Geoffrey the young,

driven by his French mother, Queen Eleanor of Aquitaine,

They rebelled to usurp the throne of his powerful father

and started a fight to conquer their territory on French soil.

Richard the Lionheart A REBELLION

King Louis invited the rebels to come to Paris

and sign a formal alliance against a common enemy.

But the weapons of steel does not always determine the outcome of a war.

You know what I missed in England?

They know very well the moment to strike.

The English know when to attack and ...

They know when to expect,

the nature of people living on the island.

I am the Queen of England.

Ask and I will do anything you want, ma'am.

English women do not need to ask.

They attack their targets directly ...

And that's why the English have always defeated the French.

They are not afraid to try different things.

I agreed to meet her at this location and his company gave me great pleasure,

but it is asking too much.

Who are you and what are you doing on my land?

I came to rescue the queen Eleanor of Aquitaine.

The queen is my guest. I promised her I would be safe here.

Are not you forgetting something?

I will read later, ma'am.

You need not bother.

You are a knight, right?

Yes sir. This is the castle of my family.

We defend these lands during the English conquest

All you need to do is take your ring

and put this wax.

Not think it's the right time.

You will not leave this room ...

without meeting me completely.

And if I leave?

Your family, your property and your cattle will be burned.

You disappear from history.

So I think it would be a bad decision.

I like men who know how to anticipate the needs of a woman.

You killed my father!

You deserve to die!

orders the lady with me.

Consider arrested by the will of His Majesty.

At least I did my last alliance.

The king wants me to go dressed like that?

Or I can dress like the queen that I am?

Abandon this flag, or abandon his life.

You have a chance to join us against our father, the king.

Now the king of France awaits us.

Closer to our beloved father step.

My sweet and beloved wife.

The maid of Aquitaine.

and cut our throats at night.

You're too dramatic, no?

Perhaps one of his men have poisoned wine. That would be...

I do not drink.

You do not understand the question?

Or did not understand the seriousness of the matter?

Because you're a bastard.

By their choice to send Ricardo to that odious castle.

I did it because I hate you!

Because it is always selfish.

You know how this feud family is costing us?

You will give everything to Ricardo, whether you win or not!

You will lose anyway.

Even the riders have a price!

We're at a time to fight for it!

So give me what I want!

Just so I end the rebellion.

Why am I a woman?

If I had Mii riders like you in my army,

already would be emperor of the world!

It is because you are a foreigner,