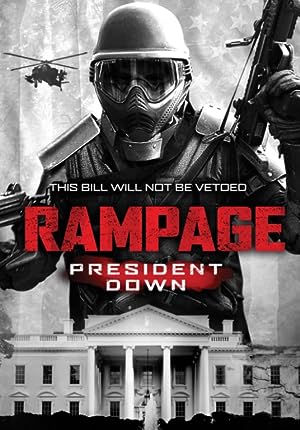 Synopsis: Bill Williamson is back, alive and well and doing a recon mission around D.C. This time he wants to cause a major population disruption within the USA which result in devastating consequences reverberating throughout the world. His new mission this time to bring down The President of the United States and his Secret Service detail. Bill brings with him all the freak-in havoc and acidity of the previous 2 movies.
Genre: Action, Crime, Thriller
Director(s): Uwe Boll
Actors: Brendan Fletcher, Bruce Blain, Loretta Walsh, Zain Meghji
Production: Sony Pictures Entertainment

Hey, dude. How much coal you have?

Do you remember me? Yes?

What is missing your friend? - He is dead.

And your friend is dead because you did nothing about it.

When you finally get up off your lazy ass, huh?

If not, you're next.

Three dead. The wanker can not be far.

We gather at the base, okay?

Yes. Maybe even a bit further.

Yes this is good.

On air in three.

led a suicide bombing in the subway to the deaths of 75 people.

ISIS took Verantwonung for the attack.

The authorities are investigating yet,

who are the suspects and whether refugees were involved.

In Paris there was a Massenschieerei

and in London the entrance to Big Ben was destroyed by a car bomb.

So far, 11 victims were counted.

Another bomb blast in Islamabad claimed the lives of dozens,

Details are not yet available, the investigations are ongoing.

Even in the United States increases the terrorist threat.

In Colorado, a suicide attack was prevented.

The Sprengstofignel a 19-year-olds did not explode.

He remains in custody, three other suspects escaped.

In Boston a veteran shot 15 soldiers at a military base

and then killed himself.

The President referred to these terrorist attacks as the biggest challenge

The air strikes in the Middle East are continuing.

Unfortunately, reports of these events are becoming increasingly common.

The President of the United States is dead.

During a press conference before the Senate,

the president, the vice president and the defense minister were shot.

The country is in shock.

Future plans. "My son will rule the world."

There are no borders. Everything is possible. But it is not.

Parents create hope and confidence against their better judgment.

Flynn will be older and be content with less.

He will be poor, or nearly poor, and happy to make it into the middle class.

He works, raises a family. And eventually moves nothing.

Then it's all over before it has begun,

what Team Flynn has meant once.

I have done my duty and just

the most powerful people on the planet killed and his corrupt partner.

I killed so many people that there can be no punishment.

I wanted to show you the world as it is, and you saw the idly.

You are obsessed with violence.

Your interested you only for the number of victims, not the message.

The President, the gun laws, nothing has changed.

The rich get richer and the poor poorer.

Health and the environment are destroyed.

raped the business elite and plunders the earth.

Most of the problems of the world are a direct result of US policy.

You think this country is the greatest in the world? That's never.

A bulwark of freedom, where anything is possible? Was it ever.

boarded a ship full of pestilence and traveled to America.

They plundered the country, raping and killing the natives.

24% of the world hold the United States for the greatest threat to world peace.

Uwe Boll (German: [ˈuːvə ˈbɔl]; born June 22, 1965) is a German-born Canadian restaurateur and retired filmmaker. He financed his own films through his production companies Boll KG and Event Film Productions. Many of his films were produced on low budgets and Boll himself had backed his projects financially or made use of crowdfunding platforms. Boll's filmmaking career is generally divided into two distinct phases: the first consists of big budget films with a usually renowned cast, most of which gained him a reputation as a "schlock maestro", while receiving highly negative reviews from critics, with Alone in the Dark being considered one of the worst films ever made. However his second phase is marked by films with a smaller budget or were independently made, relatively unknown actors and different approaches to filmmaking; Boll's Rampage film series, Tunnel Rats, Stoic, Amoklauf, Heart of America, Assault on Wall Street and Darfur have been better (or mildly well) received by critics. After losing financing and facing constant criticism, Boll partially retired from filmmaking in 2016 to work in the restaurant industry. He opened his Bauhaus Restaurant in Vancouver, which has earned positive reviews among food critics. more…

Discuss this Rampage: President Down script with the community: