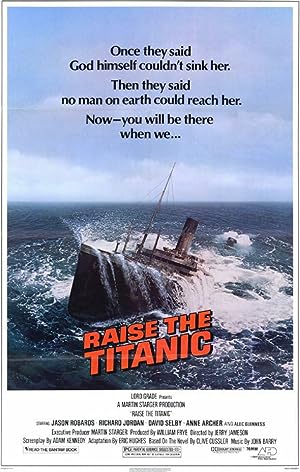 Synopsis: A group of Americans are interested in raising the ill-fated Ocean liner Titanic. One of the team members finds out the Russians also have plans to raise the ship from its watery grave. Why all the interest ? A rare mineral on board could be used to power a sound beam that will knock any missile out of the air when entering us airspace.
Genre: Action, Drama, Thriller
Director(s): Jerry Jameson
Actors: Jason Robards, Richard Jordan, David Selby, Anne Archer
Production: Associated Film Distribution
3 nominations.

The president is right, they need to be told.

- We go public on this thing, what did.

Nobody is talking about going public.

- It is secret or not secret.

You can trust these people.

This Russian thing its paper whole

Let us worry about that

Jesus, I can't believe it happens.

Let me get this straight.

You're saying there's an American on the

island of Svardlov, and you can not locate it.

And where the hell this Svardlov?

- There's a small island near the Arctic circle.

Well every country has done an exploration,

there claim for its own.

The Russians even put their troops,

And now you're telling us, you've lost this man

and you may've lost them to some Russians.

Telling you we have a diviation

A man is four days over due

at the pickup point.

Why don't you let us handle it.

We do that kind of stuff all the time.

Man had to be a mining engineer.

- So why're you telling us now?

Because if there is an incident

We'll need all the help we can get.

that we get ourself into a crap like this?

and I will take the blame.

What is this project, Jim?

We believe it could be the

I know you all familiar with laser

technology, that's what we involved with.

Each one of those lights is a power station.

Each station, when activated...

will project a beam

from ground to infinity.

No missile can penetrate it.

- Is this theory you talking about, or does it work?

There is only one problem.

In order to install the system to make it function

we need a self contain power source a large one.

The success of our project is depends upon our

I never never heard of it.

I surprises,very few people have it. - And you

think there may be some one Svardlov is that it?

That's all we think.

Hope you get him out, because if

you don't, if the Russians pick him up...

we're going to be scraping on

Kremlin next for five years.

Washington Central, this is Unit 23

Would you read me that report again please?

may be related to military operations.

- What could be so precious...

that Americans risk this kind of adventure?

Are you a chess player?

I played it when I was a student. Why?

Do you know Isaac Boleslavsky?

Of course I know him.

He was a great chess master.

May be the greatest of them all.

Many of the significant variations in the

game were invented by Boleslavsky...

and one of them was called

All right, Marganin, lets leave it for now.

You know, there wasn't for Dirk Pitt we were be

back at square one and that mining engineer

who streached out dead on a Russian island.

All of Suddenly he's involved in the

Sicilian Project not never heard of him.

Used to be a Navy man.

After his service he took early retirement and since

then he and I have tackle quiet a few things together.

He works for you?

- Well Sometimes he does, sometimes not.

Depends on the job.

chances are take a crack at it.