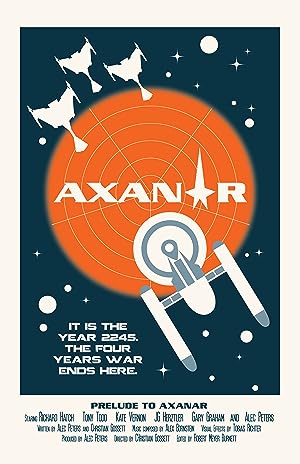 Synopsis: Prelude to Axanar is an independent Star Trek project that tells the story of Captain Kirk's hero, Garth of Izar, during the war between the Federation and the Klingon Empire. It is shot as a documentary and is the back story for the forthcoming feature 'Axanar'. Prelude to Axanar received $ 101,000 in a successful Kickstarter campaign and the finished film helped the Axanar team raise $ 638,000 in their second Kickstarter for the upcoming feature film.
Genre: Action, Drama, Short
Director(s): Christian Gossett
Actors: Richard Hatch, Tony Todd, Kate Vernon, J.G. Hertzler
8 wins & 1 nomination.

This is a galaxy wide transmission

of the United Federation of Planets.

in association with Memory Alpha, presents...

Founded nearly a century before,

this research outpost has grown

into a flourishing full-scale city.

It is a shining example of Federation progress.

There could be no Federation without Earth!

And the fact that the humans could

lead the formation of the Federation

just a few years after their

war with the Romulan Empire is...

nothing short of extraordinary.

But it represents something very

different to the Klingon Empire.

If words were water, the humans would drown us all.

The bad blood between the humans and the Klingons,

meant that the job of preventing war and

For 12 hours, the Klingon disruptors do not stop.

Archanis is reduced to rubble.

Thousands of its inhabitants are dead.

The first victims of what will come to be

known as, "The Four Years War."

[Admiral Ramirez] They had been expanding their empire

for 200 years before the Federation was formed.

That there would be a conflict,

with the Klingon people, at some point,

was obvious, to most of the members of Starfleet.

Klingons were certain that they could

merely take anything they wanted.

Starfleet's early losses did little to

dissuade them of that notion.

[Garth of Izar, Captain of the USS Ares]

we took some major beatings, the first six months.

For most of that first year, our mission was

just to slow them down, while we fell back.

Unfortunately, the Klingons were unconvinced

the Federation was any sort of match for them.

And their belief in their superiority,

left us little room to negotiate.

Well, at that point, about the only thing we

were doing, that impressed the Klingons, was...

And, there was plenty of that.

the architect of the invasions,

was a warlord named Kharn.

"Kharn , the undying" is what they called him.

The Klingons revered him, with good reason.

Vulcan intelligence is, if I may say, unparalleled, but...

even for us, he was a mystery!

It wasn't until the formation of the Federation,

that the high council began to take Earth, seriously.

And even after the Federation was

formed, many on the high council,

thought it is a mere political alliance.

Starfleet was never seen as

a match for the imperial navy.

Certainly not one that would

impede the growth of the empire.

is a monument to the art of war.

The early campaigns. Yes, the

Klingons were toying with us.

They were using a strategy known to

the Klingon people as vuvHa'chu'wI' to'

Which loosely, roughly translates as

"The strategy of least respect."

The epitome of their...

the ambush of Inverness V.

The Inverness system, as you call it,

was our first objective.

planets, of the Inverness system.

[Kharn] For your kind, those planets were

merely a source of dilithium.

For us, those planets are sacred.

It was the first time they used it on us.

It was an old Klingon tactic.

They had a word, natlhchu'wI'.

It means, "The Devourer!"

it was the same thing.