LONG SHOT of the solitary figure of a WOMAN standing

professionally alone at the end of the street.

It is a bright, still night. We can HEAR the Woman whistling

'Stardust' merrily to herself.

CAMERA TRACKS around her. A Man's footsteps are overlaid.

We HEAR the Man start to whistle 'Stardust' under his breath -

haltingly at first, then in time with the Woman.

As we approach, she glances at us over her shoulder - then

turns round for a better look.

Her whistling stops - so, at the same moment, does the

young enough to need two glances at the customers.

She smiles at us - and is pleased with the reception. She

hesitates for a long moment, weighing us up carefully...

and then - half defiantly, half expecting to be laughed

Evidently we have two quid.

She beams with relief - throws her fur over her shoulders,

jerks her head towards the right - and sets off.

CAMERA TRACKS after her. Overlaid is the sound of the

Dora resumes her whistling. So, under his breath, does the

man who is following her.

A wider street than the last - but just as empty.

Dora sways her way towards a small house. CAMERA FOLLOWS

at a respectful distance.

CAMERA PANS from Dora's hips to an overflowing dustbin.

CLOSE SHOT of a man's hand throwing something into the

dustbin. It is an empty packet marked Kodak Film. CAMERA

PANS to Dora's house. It stands next to a chemist shop.

Dora climbs the few steps which lead to her front door -

glances round at us encouragingly - then unlocks the door.

She switches on a light - and hurries up a flight of stairs.

CAMERA TRACKS after her.

She changes her tune to 'Goodnight Sweetheart'... and so -

under his breath - does the Man who is following her.

stairs, winks at Dora - looks at us for a moment with great

curiosity... winks... then passes out of camera.

Dora reaches the landing - we are close behind her.

Dora unlocks the door of her room - and goes inside.

She switches on the light, throws her fur onto a chair,

lights the gas fire then turns round.

CLOSE SHOT of Dora. She holds out her hand-smiling.

And suddenly. There is a gentle whirring purring sound.

CAMERA HOLDS ON Dora - she is staring at something with

fear. She steps back from CAMERA - but CAMERA won't have

Dora is now staring at something in horror - she opens her

mouth to scream - a shadow falls across her face.

The sound purrs on.

at the end of a street. WE SEE her turn towards CAMERA -

and smile at us.

We are watching her on a 16mm screen - projected in BLACK

CAMERA PULLS BACK to show the surround in natural colour.

A darkened room in natural COLOUR. The movie screen images

are in BLACK AND WHITE.

over a projector. He is watching Dora on the screen. He is

The Man raises his head, so that we cannot see the screen.

When he lowers it again, we see the Woman with the two-

toned hair winking at Dora... then we see Dora throwing

her fur onto a chair - and turning towards us. 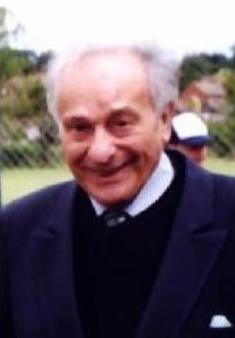 Leopold Samuel "Leo" Marks, MBE (24 September 1920 – 15 January 2001) was an English cryptographer during the Second World War. He headed the codes office supporting resistance agents in occupied Europe for the secret Special Operations Executive organisation. After the war, Marks became a playwright and screenwriter, writing scripts that frequently utilised his war-time cryptographic experiences. He wrote the script for Peeping Tom, the controversial film directed by Michael Powell which had a disastrous effect on Powell's career, but has subsequently been described by Martin Scorsese as a masterpiece. In 1998, towards the end of his life, Marks published a personal history of his experiences during the war, Between Silk and Cyanide, which was critical of the leadership of SOE. more…