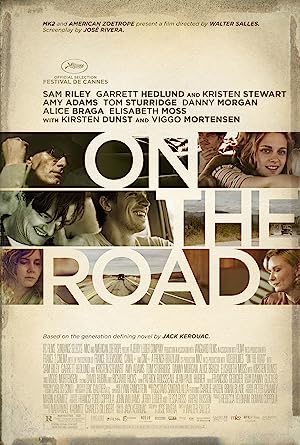 Synopsis: Shaken by the death of his father and discouraged by his stalled career, writer Sal Paradise goes on a road trip hoping for inspiration. While traveling, he is befriended by charismatic and fearless Dean Moriarty and Moriarty's free-spirited and seductive young wife, Marylou. Traveling across the American southwest together, they strive to break from conformity and and search the unknown, and their decisions change the very course of their lives.
Genre: Adventure, Drama, Romance
Director(s): Walter Salles
Actors: Sam Riley, Garrett Hedlund, Kristen Stewart, Amy Adams
Production: IFC Films/Sundance Selects
2 wins & 4 nominations.

Montana in the cold, cold fall.

Found my father in the gambling hall.

Father, Father where have you been?

Been out here in the world since I was 10.

Dear son, he said don't worry about me.

I'm about to die of pleurisy.

Cross the Mississippi, cross the Tennessee Cross the Niagara, home I'll never be.

For better or worse, through thick and thin.

Wants you to do just the same for him.

Well, the worms eat away but don't worry, watch thewind.

The worms eat away but don't worry watch the wind.

So I left Montana in an ol'freight train.

The night my father died in the cold, cold rain.

Rode up to Opelousas, rode to Wounded Knee, Rode to Ogallala, home I'll never be.

Got room for one more?

There's room for everybody.

Hang on, brother, hang on.

Where you guys from?

We're headed for the harvest.

So, you going someplace, or you just going?

You got any money?

I got enough for a pint of whiskey till we reach Denver.

You reckon if we put them things in the ground, something will grow up?

(laughs)If I get hungry enough, I plan to eat them raw !

(singing) Oh I got a pretty little girl.

I got a pretty little girl.

(All join)Oh I got a pretty little girl. She's sweet sixteen. She's the prettiest little thing I ever seen.

Though part of him never left his native Quebec, when.

he moved to this country with his dear wife Gabrielle, heloved it with all his heart.

Now, he joins his departed son Gerard in a better place.

Are you all right?

I first met Dean not long after my father died.

except that it really had something to do with my father's death,

and my awful feeling that everything was dead.

But I show up and guess what no Sal Paradise.

A boring, brooding mute has been inserted in his place.

Well, what's there to talk about exactly?

The book I'm not writing?

The inspiration I don't feel?

Even the beer's flat.

I mean, look around, man.

True, but these are temporary worries.

Life is long and wondrous and strange.

My mind is a veritable echo chamber of epiphanies.

Dig it "The air is dark.

I'll get you another beer !

I've been looking all over town for you hoodlums.

How you doing, man?

Jailbird friend of mine from Denver?

The one I've been raving about?

He didn't think we really believed that, did he?

First reports of Dean came to me through Chad King,

who'd shown me and Carlo a few letters from him,

Jack Kerouac (; born Jean-Louis Kérouac (though he called himself Jean-Louis Lebris de Kérouac); March 12, 1922 – October 21, 1969) was an American novelist and poet of French-Canadian descent.He is considered a literary iconoclast and, alongside William S. Burroughs and Allen Ginsberg, a pioneer of the Beat Generation. Kerouac is recognized for his method of spontaneous prose. Thematically, his work covers topics such as Catholic spirituality, jazz, promiscuity, Buddhism, drugs, poverty, and travel. He became an underground celebrity and, with other beats, a progenitor of the hippie movement, although he remained antagonistic toward some of its politically radical elements.In 1969, at age 47, Kerouac died from an abdominal hemorrhage caused by a lifetime of heavy drinking. Since his death, Kerouac's literary prestige has grown, and several previously unseen works have been published. All of his books are in print today, including The Town and the City, On the Road, Doctor Sax, The Dharma Bums, Mexico City Blues, The Subterraneans, Desolation Angels, Visions of Cody, The Sea Is My Brother, and Big Sur. more…