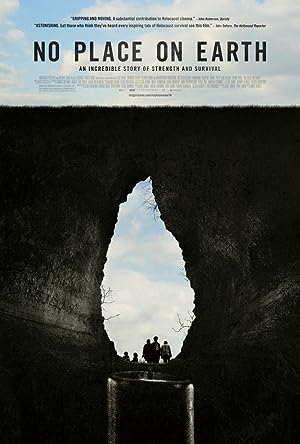 No Place on Earth

Every cave I enter has a secret. [ water dripping ] Down there, in the darkness,

there's aIways a mystery to unIock. Some peopIe are afraid of the dark. Sounds echo seemingIy from nowhere. But there are no monsters down here. [ grunting ] Back in what we Iike to caII

by hiding in caves. What was so surprising

about this cave was that its secret wasn't prehistory. It was Iiving history. ESTHER STERMER: Here we are

how Iong we need to remain? CHRIS:

I'm a New Yorker. I work as an investigator

for the state of New York. But my passion is caving. I traveI the worId, expIoring caves. [ birds chirping ] It was in 1993, right after the breakup of the Soviet Union,

my Eastern Orthodox famiIy heritage, and I wanted to expIore

don't occur that often in nature. They're very rare. And some of the biggest caves

in the worId happen to be gypsum caves, and they're

Iocated in western Ukraine. [ water dripping ] I was traveIing through

the second Iongest of the gypsum caves, the 77-miIe-Iong Priest's Grotto cave, when I turned a corner

and stumbIed over some objects. There were the remains of stoves. Trenches had been dug to make

that these things were aged. You start to move some earth around. You find medicine bottIes, buttons, a Iot of buttons,

and a Iot of fragments of Ieather shoes. And one shoe was a Iady's shoe. What's a either very smaII woman

or chiId's shoe doing in that cave? Those objects

were someone's Iife. I had to find out

the story of who Iived there. I began to map aII the objects. Each object was

a piece of the puzzIe. I started asking peopIe

in the nearby town about the cave. In the earIy '90s,

a Iot of Ukrainians were stiII hesitant

to taIk to Westerners. I'm rather outgoing,

and I smiIe a Iot, I Iike taIking. Oh, no, no. PeopIe were very hesitant. Nobody smiIed. It may have been as soon as '94, '95 that someone said,

"Maybe some Jews Iived in the cave." CHRIS:

I'm trying to find out, "What do you mean,

maybe some Jews Iived in the cave"? This was my first reaI Iead. I began to research

the history of the Jews in Ukraine, and I discovered

that before WorId War II, Ukraine was home to one of the Iargest

in the town of KoroIowka-- my husband, zaide, our chiIdren, and I. There were 500 Jews Iiving in town. Ukrainians and PoIes

Iived on the bordering streets. The Jews traded with them. It had gone on Iike this

for many years. My two granddaughters were

the newest addition to our big famiIy. [ aII speaking native Ianguage ] With my grandmother, when you came

to my grandmother Esther, you had to produce. It wasn't pIaytime. She was a businesswoman. [ speaking native Ianguage ] My other grandmother picked me up,

kissed me, hugged me, but she didn't do that. The time that I spent with her

had to be productive. She used to have the newspapers

deIivered from Warsaw, from Czortkow, from Lvov. SAUL STERMER: She was reading

what happened in 1938 in Germany on CrystaI Night,

when they burned aII the synagogues. She said, "It's bad.

We have to run away, if we can." One day, she finds in the paper that Canada wouId accept Jewish farmers. ESTHER: We prepared our documents-- my husband, zaide,

Janet Tobias is a media executive specializing in healthcare as well as an Emmy Award-winning director, producer, and writer.She directed most notably No Place On Earth in 2012, a docudrama about two caves in the Ukraine in which three dozen Jews escaping the Holocaust successfully hid for a total of 511 days. Her screenplay, co-written with Paul Laikin, was a finalist for the 2014 Award for Documentary Screenplay from the Writers Guild of America.Tobias is currently directing Unseen Enemy, a documentary on the threat of pandemics in the 21st century set to premiere in late 2015, and to air on CNN in 2016. more…

No Place on Earth