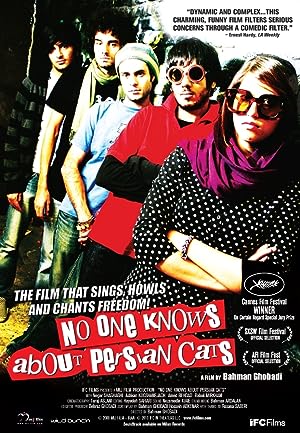 No One Knows About Persian Cats

Synopsis: Negar and Ashkan, two young Iranian songwriters, decide to set up an underground band and look for other musicians to join them, but the authorities keep putting a spanner in the works. Fed up with being hindered from expressing themselves, the two young people try to get documents to leave the country for Europe.
Genre: Drama, Music
Director(s): Bahman Ghobadi
Actors: Negar Shaghaghi, Ashkan Koshanejad, Hamed Behdad, Babak Mirzakhani
Production: IFC Films
7 wins & 5 nominations.

Dedicated to PFDC and the entire World

That sound, I don't know what it means in Kurdish

but you're extending it too much.

Try to keep it on the beat, I'll rewind it again

I have one more request.

Could you say that we need two-three more hours instead of one?

We can fix our last track and then leave.

They say the dude's crazy...

Dear Bahman! Take a break and catch some breath...

They'll say this dude's insane now, he's come to sing and lighten up.

His movie has been stopped.

they won't give him the permit for his next movie.

They are still selling his previous movie in the streets.

What am I supposed to say to him, it not good.

-Does he have a permit?

-No! He's pledged a cheque

I'll take it back two steps

-Is this music for that underground movie?

-No! He's doing it for himself.

The underground music of Iran that sparked after the arrest in Karaj.

where 400 got arrested in that concert, had it's spark from there.

with regard to that, he wants to make the underground music for the movie.

-Does it have professional actors?

-No it doesn't have professional actors

Do you know Ashkan and Negar?

They are going to act in it.

But they are leaving in two or three weeks!

-Hi! Could you open the door?

-Hi! What made you come here? Don't see you much lately.

-I was just passing and thought I'd visit you.

-And I've heard that Ashkan has been released.

-Yea he got released on Monday, and is out now.

I heard you rocked. The guys said you were on the dish.

A gathering, and blood was served like a satanistic worship...

You know, They put their own perception on it

when they see someone playing their music close them down.

-I've heard you're going to London invited to a festival

We can take care of that, and get you a band.

You need two guitar player, a bassist and a drummer.

Listen! Ashkan is saying that we should leave for good.

This year it'll get an Oscar. Yes yes yes this one!

It'll get an Oscar. If not I'll give you all my movies for free.

Listen Babak! I don't have any problems going.

I've already left once and my Passport and visa is ok.

Now the problem is Ashkan.

If we can find someone for that it'd be great.

Find one for what?

-To get him across

-So you want to find someone to get him over?

Wait. Do you see that guy?

He's into music and a good friend. Do you want me to tell him?

-Can he arrange a band as well?

Yea he can fix anything, you want me to tell him?

I'm not at all into getting people across!

-You say this stuff, and she starts believing stuff...

How many did you get over two years ago?

-David did that, has nothing to do with me.

Doesn't matter. David or whoever.

Just get their thing going.

-Now anyone that has beef with his mom...

-No one has had a fight with his mother.

I don't have a beef with my mom and I'm not going.

Ashkan's in their band. Why you acting like this

Just get their thing going.

-Does Ashkan have a beef with his mom? So what?

-We going to play music and sing

He doesn't have a passport or visa...

Well you have all sort of people playing music.

Get to know them and play with them.

No One Knows About Persian Cats