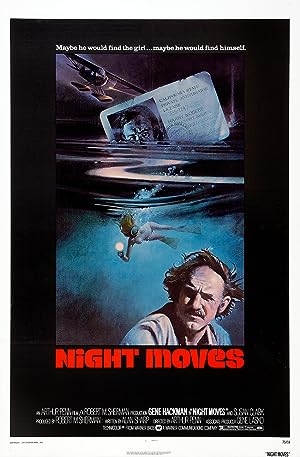 Synopsis: Private detective and former football player Harry Moseby gets hired on to what seems a standard missing person case, as a former Hollywood actress whose only major roles came thanks to being married to a studio mogul wants Moseby to find and return her daughter. Harry travels to Florida to find her, but he begins to see a connection between the runaway girl, the world of Hollywood stuntmen, and a suspicious mechanic when an unsolved murder comes to light.
Genre: Crime, Mystery, Thriller
Director(s): Arthur Penn
Actors: Gene Hackman, Jennifer Warren, Edward Binns, Harris Yulin
Production: WARNER BROTHERS PICTURES
Nominated for 1 BAFTA Film Award. Another 1 nomination.

and not one of our computers.

It's a lady called Arlene Iverson.

Looking to get her daughter home.

in the movies. Maybe you remember.

I'll give you what stuff we have on Arlene.

Your old lady's in the office.

It's too late now, Mr. Ibez.|It has been too late since Monday.

What brings you across the tracks?

Oh, I just have to go visit|one of the beautiful people.

How'd you get to meet|one of the beautiful people?

It's one of Nick's handouts.

Have you had any second thoughts|about joining his agency?

Yeah. That's not an agency.|That's a information factory.

I'd go bananas there in one week.

You gonna be late tonight?

My Night at Maud's.

I saw a Rohmer film once.|It was kind of like watching paint dry.

When are we going bowling again?

You get some weird satisfaction|from this sort of thing, don't you?

Are you the kind of detective|who, once you get on a case...

...nothing can get you off it?|Bribes, beatings.

Before we had a union.

My daughter Delly...|Or would you believe Delilah?

My husband was a film producer|who wanted to produce biblical epics.

Two weeks. I'm used to her staying|out nights. At first I didn't worry.

How old is she?

You got any idea what she does|with her spare time or...?

Gets laid, I daresay.

Do you have a name for any of these|freaks that she hangs out with?

I called him, and he told me|Delly had left town.

Told me not to bother him and hung up.

Do you have an address for Quentin?

Preferably one taken in natural light.

The only thing I got|out of him was a new name.

That's after I quit acting.

Did you ever see me in anything?

I was never big, not really big.

You know, studio premieres,|studio romances, not much talent.

I got lucky. I grabbed off|one of the big guns, Irving Grastner.

Oh, I had lovely tits.|Even if I do say so myself.

They're sitting|on a little bit of silicone now...

...but when they were up for grabs,|they were really something special.

Delly didn't do so bad, either.

All right. Go find her.

You can get cheaper.

Can I get better?

For them that don't have football,|there's always religion. You ever miss it?

You ought to get money into those.|They're appreciating faster than real estate.

Now that the Mexicans got their backs|up about their art being ripped off.

Excuse me. I hate to tell you|what this little piece of crap is worth.

If they didn't all remind me|of Alex Karras.

Yeah, here it is.

- The tape on Arlene. She likes big guys...|- That ever buy you anything?

Hey, Arlene and me go way back.

did not complete curriculum.