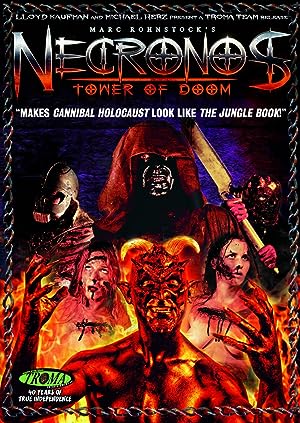 Synopsis: Necronos, one of the mightiest minions of the devil himself has come to earth to create an invincible army of the undead under leadership of barbaric demons, called Berzerkers. To achieve his goal Necronos needs numerous often very macabre and difficult to come by ingredients. So Satan sends him two assistants to achieve his goal - Goran, a Blood Demon and footman loyal to Necronos as well as The Mighty Witch to locate the chosen one - a virgin witch.
Genre: Horror
Director(s): Marc Rohnstock
Actors: Thomas Sender, Manoush, Timo Fuchs, Mario Zimmerschitt

Once upon a time there was a wizard who brought fear and terror to the kingdom. It was said that he embodied evil in all it's shapes and forms

that he was a faithful servant of the devil and had made a diabolical plan to seal the fate of all humanity.

His victim's souls were to be cursed for all eternity. Rumor had it that Necronos had sacrificed countless men and women in sadistic rituals.

Often enough one would think their screams of pain would never end, yet eventually they did.

The devil rewarded his faithful servant with immortality

and mighty magic powers. To fulfill the pact the wizard

had to enslave the souls of his victims for the army of darkness.

An army of undead warriors that was supposed to do the devils work until he himself arrived on earth.

Brave men who went to fight and stop the evil never returned.

But the wizard's army turned out to be weak. To give it unlimited powers the devil ordered the wizard to send the blood of

the chosen one, a virgin witch, to hell. But the only one he found had given herself over to the worldly desires of the flesh.

So the wizard's army remained weak. The king had the best blades made and sent an army of chosen warriors into an ocean

of blood to fight against the legions of the undead. To seal the wizard's fate forever.

Only few returned from the battle.

Yet a handful of warriors managed to break the wizard's power delivering him to his fate.

death for his heinous crimes. The wizards remains were burned.

The people feared you for far too long!

But it was a matter of time until his soul that belonged to the devil returned to the tower,

to where his remains were burned. For centuries the wizard had licked and healed his wounds in hell waiting to return.

More powerful than ever the wizard who was the master of the demons now unleashes a new era of damnation. This is where it all begins. His name will never again be forgotten.

mortals to expand our army indefinitely.

And bring me those women that

the witch spoke about.

But beware, all those women are witches as well.

It is possible that they are aware of their abilities.

And if they have'nt then they

And we've got the entire weekend.

Was about time to use the

A fishing rod and a cold beer.

What more does a man need?

The beer is still missing though.

Gotta work on that!

Bring the corn too!

Seems to be quite a big fish!

catch is mine today.

Where is the can opener?

Do it real slow!

Shit waht is this?!

Yeah I thought about that too.

Well if you wanna be sure you do it.

I mean...what do you have to lose?