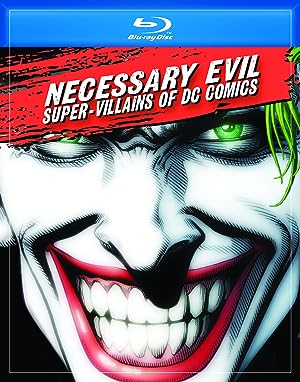 Synopsis: In this new documentary film, the malevolent, sometimes charismatic figures from DC Comics' hallowed rogues' gallery will be explored in depth, featuring interviews with the famed creators, storytellers and those who have crafted the personalities and profiles of many of the most notorious villains in comic book history.
Genre: Documentary
Director(s): Scott Devine, J.M. Kenny
Actors: Christopher Lee, Neal Adams, Brian Azzarello, Claudia Black
Production: WARNER BROTHERS PICTURES

NARRATOR:
Evil has many faces.

A man who laughs.

The master of Metropolis.

The Guardian of fear.

A conqueror of worlds.

Many faces, but just one name:

our fears and frustrations...

They commit the heinous

crimes we will not.

And in a world where right

and wrong are not absolute...

...where shades of gray exist in

life as well as the comic page...

In the world of comics, one could argue that

the villain is even more vital to the story...

...than the just and moral hero.

For without a proper adversary...

...we tack the very essence of story:

After all, isn't it the villain

who catapults the hero into action?

Without the villain, there's really no

story. The superhero exists and does nothing.

If the villain isn't acting

The superheroes are always reacting.

The villains are making things happen.

Villains are the ones with a plan. The villains

are the ones who are taking the initiative.

If you define "protagonist" as

somebody who sets something in motion...

somebody who stops him...

...almost all the villains in

You need that ongoing impetus of the bad

guy, the one who's gonna be a challenge...

...and be put in their place by

somebody who upholds those rules.

NARRATOR:
Not only is there no story

or conflict without the villain...

...but it's through the villain that

we see our hero at their very core.

We see their many flaws, we

see their many weaknesses.

We see what makes

them the hero they are.

to define the hero...

You have no anvil from which the superhero

is pounded into the shape that he is.

...allow the hero or the superhero

to really flex their muscles.

The more power the supervillains have...

...the more you can showcase

how important that superhero is.

your hero is. They have to overcome...

...who knows what they want and who's

on a mission that they believe in.

So if the hero can stop them, you

know, it makes them that much better.

All the more true in the DC universe

because we have rich villains.

One is Flash and Reverse-Flash. The

very names give you what they are.

suffered something so horrible.

And he felt like the Flash could have fixed it.

He knew that the Flash could go through time.

He'd seen it happen before.

He said, "Why don't you go back, prevent

this from happening? Why won't you?"

The guy won't do it.

"Well, he won't do it because he

So I'm going to have him feel

tragedy to make him a better hero.

You need to be able to take the

measures to protect everyone you love.

You wouldn't do it for me. Maybe you'll do

it for yourself. So I put you to the test. "

all about Batman's intellect.

He, to me, is the sword-sharpener.

He's the guy that says:

"if you are not clever enough,

everybody dies in that way. "

He shows in some ways that

...needs to be the greatest detective.

At his heart, he's born in Detective Comics.

At the core of the character is Sherlock Holmes.

He's that guy that, because he's human,

needs to be smarter than anybody else...

Milton Finger, known professionally as Bill Finger (February 8, 1914 – January 18, 1974), was an American comic strip and comic book writer best known as the co-creator, with Bob Kane, of the DC Comics character Batman, and the co-architect of the series' development. Although Finger did not receive contemporaneous credit for his hand in the development of Batman, Kane acknowledged Finger's contributions years after Finger's death.Finger also wrote many of the original 1940s Green Lantern stories featuring the original Green Lantern (Alan Scott), and contributed to the development of numerous other comic book series. He was posthumously inducted into the comic book industry's Jack Kirby Hall of Fame in 1994 and the Will Eisner Comic Book Hall of Fame in 1999. The Bill Finger Award, founded by Jerry Robinson and presented annually at the San Diego Comic-Con to honor excellence in comic-book writing, is named for him. more…