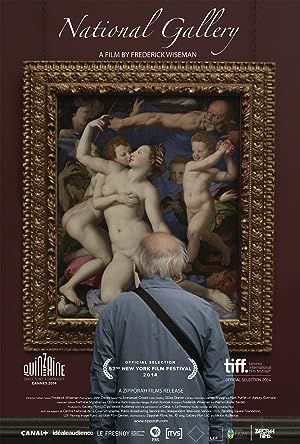 Synopsis: The National Gallery in London is one of the great museums of the world with 2400 paintings from the 13th to the end of the 19th century. Almost every human experience is represented in one or the other of the paintings. The sequences of the film show the public in various galleries; the education programs, and the scholars, scientists and curators, studying, restoring and planning the exhibitions. The relation between painting and storytelling is explored.
Genre: Documentary
Director(s): Frederick Wiseman
Actors: Leanne Benjamin, Kausikan Rajeshkumar, Jo Shapcott, Edward Watson
Production: Zipporah
9 nominations.

We know, but I think

it's worth our trying to remember,

that the Middle Ages were religious,

in a way that we can't really conceive

I want you now to imagine, if you can,

that you are inside that church,

which you see as a model, and into which

this altarpiece was once placed.

So no big windows,

The light would be filtering in.

You're not in the National Gallery,

you're inside that church.

maybe the sound of prayers

The smell of incense used

to carry up the prayers of the faithful

to the heavenly realm.

And, if you will, now, just imagine

that you are looking at this painting

by the light of candles.

which would shine against the gold.

you can't read, you can't write,

too hot in summer, too cold in winter,

death is part of the threnody of everyday life,

people are dying all the time -

"if I'm good, I can perhaps get up

to the kingdom everlasting,

"where all is good, great and golden

And I think another thing

By the flickering candlelight,

these figures were moving.

and could hear your prayer and intercede

for you with Christ and the Virgin in Heaven.

So the painting would be acting as a

sacramental channel from earth to Heaven.

And in a sense,

that's how this painting worked.

I don't mean to make this sound as crude,

perhaps, as I am,

but if you will, for a moment, just imagine

that I've brought from my pocket

a picture of a sweet grey, fluffy kitten,

and I've pinned it here,

and I've said, "Here are the darts,

aim for the eyes of the grey, fluffy kitten."

It's just a bit of paper, but in some way,

in a peculiar way you can't quite explain,

be hurting some fluffy kitten,

So I'm not suggesting to you that,

They're real! They can hear me!"

But with a same kind

I am suggesting to you that

there is a very strong attachment

and the thing itself.

So we're now in the National Gallery,

having a look quite quietly,

thinking about aesthetics and gold and

colours made from ground pigment.

But what we must remember is how

this was originally intended to be seen.

So, I've tried to sort of pull together

and I don't mean this to be a criticism...

No, I'm just trying to be very open here.

I think what comes out of it

is that, as an organisation -

our public voice is quite

when we have forums together

and we're talking about things.

And I kind of tried to chunk

that up this morning, of,

"How does that manifest itself?"

One is that just, quite simply,

I still find it quite amazing

that we don't kind of really talk much

about the public and the visitors.

But actually, I don't think that, when

it comes to a lot of what we talk about,

in some of our meetings

that actually are talking about

communications out to the public,

we're not necessarily focusing on those

52 million people and their needs

as much as I think we could be

Frederick Wiseman (born January 1, 1930) is an American filmmaker, documentarian, and theatre director. His work is "devoted primarily to exploring American institutions". He has been called "one of the most important and original filmmakers working today". more…