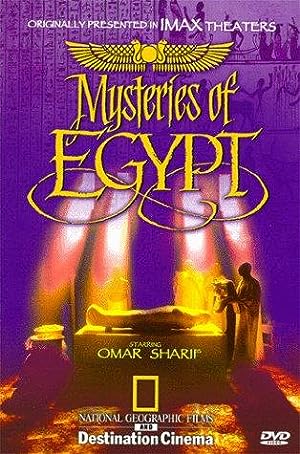 Synopsis: Egypt is and ever was a place of mystery. Many rumors spread around the great Pyramids of Gizeh (the only one of the seven wonders of the world left), their age ranges - in different theories - between 3,000 and even 12,000 years. Here, an old Egyptian is asked by his granddaughter about those mysteries of which we all heard in one way or the other. The action takes us to Howard Carter, who, after years and years of searching, finally found King Tutankhamen's (Tut-ench-Amun) grave in 1922. This was a major event in archaeology, as this grave was never robbed and therefore in the same condition as it was left (est.) 1339 B.C. We also get to see the Nile's wells and other historic landmarks that make Egypt an important part of world history.
Genre: Documentary, Drama, Family
Director(s): Bruce Neibaur
Actors: Omar Sharif, Kate Maberly, Timothy Davies, Julian Curry
Production: Destination Cinema
1 win.

No land on earth possesses | nore wonders than Egypt

but revealed occasionally | in a glint of gold

or a curious tale.

Our story begins with a death

the death of an unusual boy.

Workshipped as the son of Ra, | the sun-god

We don't know how he died

only that his death was sudden | and mysterious.

His body was preserved | in the manner of other pharaohs

and priests anointed his coffin

to prepare him | for his final journey...

into the world of the dead.

The rituals had to be finished

before his father, the sun, | descended into darkness.

So this young pharaoh | was secured in his tomb

and his seal was pressed | into its entrance.

From that time on, | it was to be a place of peace

This young king's name was...

in The Valley of the Kings

Other tombs were discovered | and completely pillaged

Believeing he could find it

but they yielded nothing.

That year, he brought | a beautiful canary

to brighten his spirits.

The workmen called it | "The Golden Bird"

and told Carter | it would bring him good luck.

But as work began

and time was running out

was an English earl | fascinated by Egypt

but even he was losing faith

and had threatened | to cut off the money.

knowing that if found intact

the tomb would be filled | with amazing artifacts

that would help us peer | through the shadows of time...

to glimpse a world | of human splendor long lost..

to glimpse our very beginnings.

That's a great story, Grandpa, | but I want to know more.

You live here, and I know | you can tell me the real story.

Well, my friends want me | to ask about The Curse

How anyone who entered | King Tut's tomb...

...will have some terrible | thing happen to them.

I don't know | if I believe it

but will you | tell me about it?

So, the pharaohs, | the tomb, the monuments

the great civilization | who built them

Yes, I can see that

You shall hear | all about it, but first

we must take | a trip together.

Where will we start, then

At the source, of course.

The source of the Nile.

It is the longest river | on earth

the greatest river in Africa

crossing nearly half | the continent

It is born of ywo rivers:

The White Nile, which rises | near Lake Victoria

and heads north through Uganda

and the Blue Nile, | which descends

from the highlands of Ethiopia.

They must in the desert of Sudan

forming the main trunk | of the Nile.

By the time it deains | into the Mediterranean Sea

its waters have journeyed | more than 4,000 miles.

To the outside world

the source of the great river | was an enduring mystery

but to the ancient Egyptians, | the source was clear:

The Nile flowed from the realm | of the gods.

But what has the Nile to do | with mummies and curses?

Everything. There would be no | mummies, no ancient Egypt

in fact, no Egypt at all | without her.

You see, Egypt without the Nile | is a desert

suitable for camels | and scorpions

but not great civilizations.

It's only here, along | the floodplain of the Nile

that the desert's heat | is softened