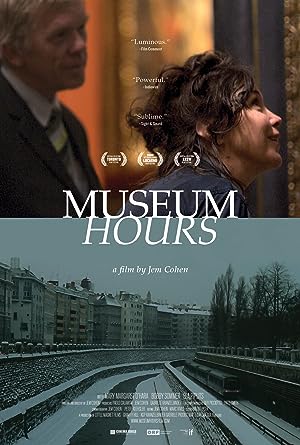 Synopsis: In the Kunsthistorisches Art Museum in Vienna, Johann is a security guard who finds a special quiet magic there. One day, a Canadian woman arrives to visit to the city, and the two strike up a friendship through their appreciation of art. That relationship helps put all the other goings-on at the museum and in the city in perspective, as Johann observes and participates in them in a world where art can say so much more than a casual visitor might know.
Genre: Drama
Director(s): Jem Cohen
Actors: Mary Margaret O'Hara, Bobby Sommer, Ela Piplits, Marcus O'Hara
Production: Cinema Guild
2 wins & 9 nominations.

Somehow, it's already my sixth year

working in the museum.

I'm thinking about that as I take my seat,

with the big wooden door at my back

and the little rope in front,

Guarding has its tedium,

Before this, I taught woodworking in a vocational school

and listened to the saws buzz all day.

And before that, in my younger days,

I worked in the music business,

though it didn't seem so much

of a business to us at the time.

and drove the van on many tours, both long and short,

and knew the inside of every smoke-filled

hole from Sheffield to Hamburg to my Vienna,

though there weren't quite as many

holes here as we would have liked.

Well, mostly it was good.

My favorite room is the Bruegel room.

It is, one can say without boasting,

the finest room of Bruegels in the world,

and perhaps the most popular room in the museum,

so there's always much watching out to do.

And when it's quiet

or one tires of looking only at visitors,

one can turn an eye to the paintings and

you will always see something new, I think.

You've heard that before, I'm sure, but it's quite true,

especially when it comes to Bruegel.

Now, some of my co-workers, I'll admit,

with their minds on the night's parties

or the day's exams.

And some, well some have worked here so long

it's hard to say just what they've done with their minds.

But that's their own business,

and we all seem to get along.

For me, the paintings are almost always worth a look

and the Bruegels are worth that and more.

Just the other day I noticed a frying pan

sticking up from a figure's hat

that I'd somehow missed before.

And that led me

to thinking about eggs, and to start a

search for them in different paintings.

And each time I counted one I would go

make my rounds and return to search again,

and before I knew it an hour and a

half had slipped pleasantly by.

a bone, a broken egg,

A woman came into the museum

and spent quite a bit of time,

first just sitting, and then looking in the galleries,

none of which is unusual in itself...

But what is it about some people that makes one curious,

while with others one would be just as

happy to never know a thing about them?

Three or four days later, she was back again,

struggling with a map

and looking more than a bit confused.

I did want to help her but I must admit,

I brought up the phone call in part because

it would allow me to confirm if her story was true.

It's sad, but one has to be careful these days.

But she did come back, and she did ask me to call.

And it was true.

She was stranded all right.

But not as stranded as her cousin, Janet,

in a coma of all things.

Anne knew nothing of the city

or how long she should or could stay,

or what to do with herself.

I guess she spent a lot of time wandering about,

but she didn't seem to have much money,

and of course, it was cold.

I got her a pass to the museum.

It was no big deal.

Nor was it any trouble to help out a bit myself.

If I were to wake up lost in Montreal,

where she came from,

it's what I'd hope someone would do for me.

It's always the hands.

She asked if I'd go to the hospital with her.

It felt good to see my city anew,

Jem Alan Cohen (born 1962) is an Afghanistan-born American filmmaker based in New York City. Cohen is especially known for his observational portraits of urban landscapes, blending of media formats (sixteen-millimetre, Super 8, videotape) and collaborations with musicians. He is the recipient of the Independent Spirit Award for feature film-making. "Cohen's films have been broadcast in Europe by the BBC and ZDF/ARTE, and in the United States by the Sundance Channel and P.B.S. They are in the collections of the Museum of Modern Art, The Whitney, and Melbourne's Screen Gallery." He also makes multichannel installations and still photographs and had a photography show at Robert Miller Gallery in 2009. He has received grants from the Guggenheim, Creative Capital, Rockefeller and Alpert Foundations, the National Endowment for the Arts, and other organizations. more…