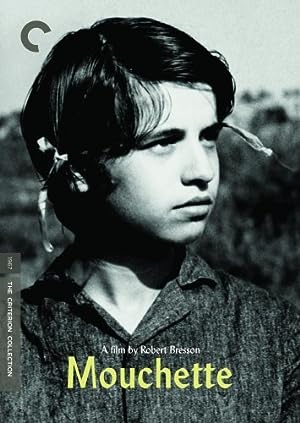 Synopsis: Mouchette is a young girl living in the country. Her mother is dying and her father does not take care of her. Mouchette remains silent in the face of the humiliations she undergoes. One night in a wood, she meets Arsene, the village poacher, who thinks he has just killed the local policeman. He tries to use Mouchette to build an alibi.
Genre: Drama
Director(s): Robert Bresson
Actors: Nadine Nortier, Jean-Claude Guilbert, Marie Cardinal, Paul Hébert
Production: Rialto Pictures
5 wins & 1 nomination.

Louis Émile Clément Georges Bernanos (French: [ʒɔʁʒ bɛʁnanɔs]; 20 February 1888 – 5 July 1948) was a French author, and a soldier in World War I. A Roman Catholic with monarchist leanings, he was critical of bourgeois thought and was opposed to what he identified as defeatism. He believed this had led to France's defeat and eventual occupation by Germany in 1940 during World War II. Most of his novels have been translated into English and frequently published in both Great Britain and the United States. more…

Discuss this Mouchette script with the community: