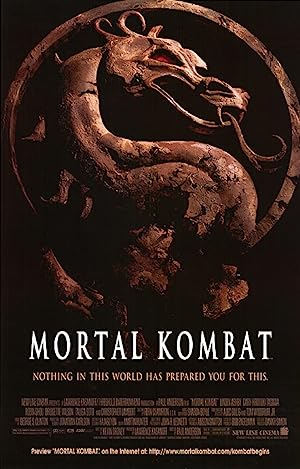 Synopsis: Based on the popular video game of the same name "Mortal Kombat" tells the story of an ancient tournament where the best of the best of different Realms fight each other. The goal - ten wins to be able to legally invade the losing Realm. Outworld has so far collected nine wins against Earthrealm, so it's up to Lord Raiden and his fighters to stop Outworld from reaching the final victory...
Genre: Action
Director(s): Paul W.S. Anderson
Actors: Christopher Lambert, Robin Shou, Linden Ashby, Cary-Hiroyuki Tagawa
Production: New Line Home Entertainment
1 win & 3 nominations.

- Your brother's soul is mine.

- Let's go! 60 seconds to target. Jax, is the perimeter secured?

- l trust 1 person on this planet, Jax. You’re talking to her.

l love punctuality in a woman...

- You killed her partner, didn't you?

Just make sure she's on that boat.

Sonya Blade must be at the tournament.

- Maybe me and Sonya should share a cabin. Have our own little honeymoon cruise.

This is where you fall down.

Where do you get these guys?!

And the press says l don't know how to do this stuff?

- No we’re not doing it again.

- What do you mean you’re not doin—

- Johnny it's the last shot of the picture, where are you going?

and I’m gonna shoot myself for being in your movie!

- (no you cant leave me hangin).. they’ll kill me, l'll be back directing traffic.

You're killing me, Johnny! l love ya, l need ya.

there's, uh, someone over there who wants to speak to you.

- You let somebody on the set, you dont know who it is?

- lt better not be a reporter.

You want me to find out?

Hey! Mister, you're in my chair.

- I see the, uh, press is still giving you a hard time.

- Johnny, you're one of the best martial artists in the world. l can help you prove it.

lt's held once a generation.

The best fighters in the world are invited.

You win the tournament, you win their respect.

They'll tell the entire world you're the real goods.

- ls this the place?

This is where we found his body.

- After you left for America...

he followed in your footsteps.

Preparing for the tournament.

- Grandfather ... it wasn't enough you filled my head with that nonsense?

- To save the world is not nonsense.

How can you, a wise man, believe this?

- Liu Kang has been given the dream.

He is the Chosen One.

Turned his back on us.

Why have you come back?

- l want to represent the Order of Light at the Tournament!

- The man who killed my brother will be there.

- That cannot be your only reason for going...

or you will fail.

We're fighting for the fate of the world!

- That's why you left the temple and ran away, isn't it?

The Great Tournament was too much responsibility.

Edward John Boon (born February 22, 1964) is an American video game programmer and director who was employed for over 15 years at Midway Games and since 2011 has worked for Warner Bros. Interactive Entertainment in its subsidiary company NetherRealm Studios. Boon is best known for the widely popular Mortal Kombat series, which he created with John Tobias. more…