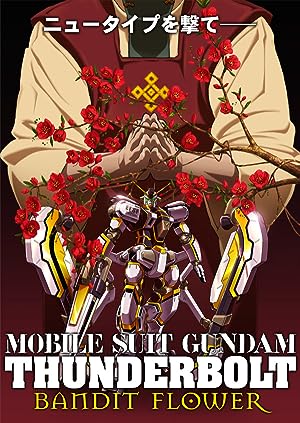 Human life is a miracle.

What about other animals?

Would a bird give up its wings to dive in the ocean?

Would a turtle give up its shell to fly into the skies?

Would a peacock give up its patterns... for stripes?

But... humans are different.

They can continue to innovate.

You're just a fast crab!

And the Flanagan Agency...

Everyone's still there. It's a Baoa Qu!

Please give us the order to continue.

Are reports only coming through wire communications?

How can they be so blind to the situation until the very end?

The Federation special forces are...

I don't care about taking out the Zabi dictator.

There is something else we must take.

Daryl, you okay? The control stick is different. Don't overdo it!

Cornelius, got any tissues?

The Federation has the psycommu.

wasn't enough to thwart the Federation.

Even after all this?

The war of independence is still on.

But... Zeon became a republic after it lost.

Federation transport planes. Did they see us?

This is Lt. Barclay. Your pleasant flight's over.

Show me what you learned in training!

It's so hot. And damn humid too.

And it's bright. The colonies were more comfortable.

The ocean, snow, desert, and grass are all real. Earth really is beautiful.

Daryl, make sure you wash your feet! Seawater will make things rust!

To the former Living Dead Division, you're a savior.

This emblem shows that we, the maintenance team, vow to be of use to you.

That guy is Ensign Daryl Lorenz.

A survivor of the Thunderbolt Sector.

He got prosthetics just so he could pilot the Psycho Zaku.

No one can match his level of

He's a true ace pilot. I admire him.

Ensign Billy, easy on the cigarettes. They're unhealthy.

The Earth is a big place. It won't matter if I pollute it a little, Sebastian.

Don't step on the coral.

Hey, is it hard to do maintenance in gravity?

I guess. When there's gravity, it's hard to move.

You're a Thunderbolt Sector survivor, right?

I wanted to see the famous Gundam.

Around that time, I was fighting at Confeito.

Were you in a GM then?

In Operation Star One, too.

Io used that one at first as well.

Yes. I wish he was here for this operation.

Although it's my first time on Earth.

That's reassuring. I'm counting on you.

But we can move already.

That's not the issue.