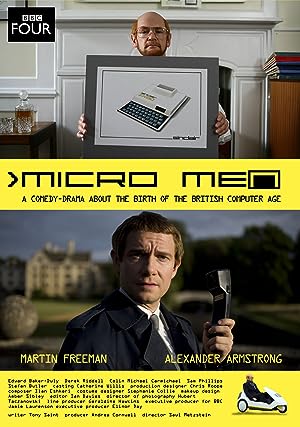 Synopsis: In 1979 Clive Sinclair, British inventor of the pocket calculator, frustrated by the lack of home investment in his project,the electric car, also opposes former assistant Chris Curry's belief that he can successfully market a micro-chip for a home computer. A parting of the ways sees Curry, in partnership with the Austrian Hermann Hauser and using whizz kid Cambridge students, set up his own, rival firm to Sinclair Radionics, Acorn. Acorn beat Sinclair to a lucrative contract supplying the BBC with machines for a computer series. From here on it is a battle for supremacy to gain the upper hand in the domestic market.
Genre: Biography, Drama
Director(s): Saul Metzstein
Actors: Alexander Armstrong, Martin Freeman, Edward Baker-Duly, Sam Phillips

Tonight we're going to paint a picture of success,

peopled with characters who have imagination,

faith in the future

and a very positive attitude to life.

Which means, simply, that they

never, ever take no for an answer.

for the electronics boom.

into a 3 million pound business.

who could beat the Japs and the Americans

at their own game.

I consider it very much my role

to foresee the future.

For example, I anticipate totally

powered by electricity drawn from

internal batteries or the mains.

Starting in the early 1960s

Sinclair has introduced a world

to a series of remarkable technological advances.

and his real breakthrough,

Sinclair went on to produce dozens of models

before foreign manufacturers flooded the market.

Undaunted, Sinclair moved on to

Faced with financial ruin, Sinclair had to

turn to the government for help -

to the National Enterprise Board

in order to fund future projects.

What we've brought in is public investment,

and we're confident that the portable

will be a great success.

This is claimed to be the world's first

It's been launched by an English company

in America, later this week.

This is one of the things we hope will

be making money for Britain

this year, and in years to come.

Whether it does or not,

you can at least say

that it works, and that it goes into your pocket.

The answer is no.

Have you even looked at these accounts?

We're in no position to throw away

This is not a concept product.

Not an amusement arcade!

There is no more research money for the car.

Who are these people?

What do they think they're running here?

What's the point of funding an invention

if you can't stomach the inventor?

What the bloody hell's the matter with you?

I don't give a shit about components.

Just get it working!

What the bloody hell do you think I pay you for?

The top end, I've got people who

don't know their arse from their elbow...

I'll have a word with him.

...at the bottom end, there are people

who can't even answer a fucking telephone!

I've had enough of these

and hi-fis as far as they can go.

be hijacked by the Japanese

and their ugly plastic grot.

I'll be damned if they take away my car.

They don't have the first idea about

Can't they see we exist to push barriers?

What's that line from Browning...?

'A man's reach must exceed his grasp,

or what's a heaven for?'

No grudges, you know me.

As inventors, we're obliged to dream.

To be unconstrained in our quest for progress.

Always to be pushing at the barriers.

And we must never forget that allied to