Synopsis: Bobby is a struggling boxer and bodyguard for his stripper girlfriend. But he hates his work and wants to move up. So he agrees to go to New York City for his boss to help in the delivery for a money laundering scheme. His partner in crime is his best friend Ricky, an obnoxious loudmouth who has seen one too many mafia movies. Bobby tries to keep it cool and get the job done, but Ricky's antics threaten to blow the entire situation.
Genre: Comedy, Crime, Drama
Director(s): Jon Favreau
Actors: Jon Favreau, Vince Vaughn, Joe Goossen, Famke Janssen
Production: Artisan Entertainment
1 nomination.

hall. One is BOBBY, the other is RICKY. They are drawn

the REFEREE backs away. Immediately the two fighters unload

a relentless barrage of POWER PUNCHES. Neither man is holding

back, and the punches all find purchase in the swelling faces

of their opponent. The crowd rises to its feet in appreciation

Bobby drives Ricky home through the winding twists of LA's

landmark canyon. Both their faces are swollen, verging on

Trans Am with the gold Firebird stenciled across the hood.

The car is not in great shape, but in its day ruled the road.

A Hawaiian mini warrior mask hangs from the rear view.

The T-top is out, and Ricky struggles to light his cigarette

in the wind. He finally ignites the whole book of matches in

frustration, lights up, then tosses it out.

It lands, still flaming, at the base of a 'No Smoking in the

Canyon' sign. They drive down the palm tree lined stretch of

Boulevard. The Strip lights are first flickering to life.

The opening SCORE dies away as Ricky sits beside Bobby. The

neighborhood is awful. The light of the corner liquor store

and a menthol cigarette billboard make up for the broken

street lamps. Ricky smooths out his running suit and steals

an instinctive cautionary look, scanning all the blind spots

for predators. The swelling has now truly set in. He's a

Did Max mention anything about any

What are you saying?

You said if you didn't have a winning

So, it's not a winning record.

It's not losing record.

That's not what you said. You said

if you didn't have a winning record -- 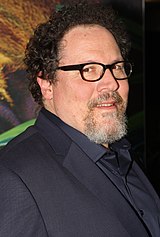 Jonathan Kolia "Jon" Favreau is an American actor, filmmaker and comedian. As an actor, he is known for roles in films such as Rudy, Swingers, Very Bad Things, The Break-Up, and Chef. more…