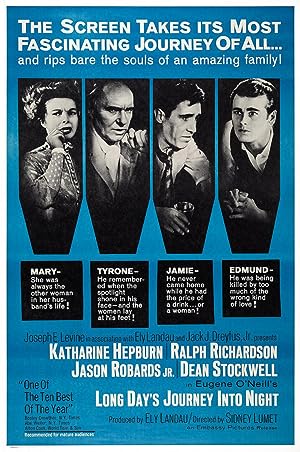 Synopsis: Over the course of one day in August 1912, the family of retired actor James Tyrone grapples with the morphine addiction of his wife Mary, the illness of their youngest son Edmund and the alcoholism and debauchery of their older son Jamie. As day turns into night, guilt, anger, despair, and regret threaten to destroy the family.
Genre: Drama
Director(s): Sidney Lumet
Actors: Katharine Hepburn, Ralph Richardson, Jason Robards, Dean Stockwell
Production: Republic Pictures Home Video
Nominated for 1 Oscar. Another 5 wins & 4 nominations.

Thank heaven the fog is gone.

out of sorts this morning.

I wasn't able to get much sleep with that awful forghorn going all night long.

Yes, like having a sick whale in the backyard. Kept me awake too.

You have a strange way of showing your restlessness.

You were snoring so hard I couldn't tell which was the foghorn.

- Ten foghorns couldn't disturb you. You haven't a nerve in you. You never had.

- Nonsense. You always exagerate about my snoring.

- I couldn't. If you could only hear yourself once.

Yes. It's terrible the way we all pick on you isn't it? You're so abused!

No matter what the joke is, it's a relief to hear Edmund laugh.

He's been so down in the mouth lately.

Some joke of Jamie's I'll wager.

- He's forever making snearing fun of somebody, that one.

Don't start in on poor Jamie dear, he'll turn out alright in the end. You wait and see.

Are they gonna stay in the dinning room all day? Jamie! Edmund!

Come out on the porch, give Cathleen a chance to clear the table.

You'd make excuses for him no matter what he did.

I've been teasing your father about his snoring.

I'll...I'll leave it to the boys James, they must've heard you.

Though not you Jamie I could hear you down the hall

almost as bad as your father you're like him.

As soon as your head touches the pillow you're off.

And ten foghorns couldn't wake you.

Why are you staring Jamie?

Is my hair coming down? Or... something?

It's hard for me to do it out properly now.

No. Your hair's alright Mama I was just thinking how well you look.

Just as I was telling her Jamie. She's so fat and sassy there will soon be no holding her.

And I'll back you up about Papa's snoring. Gosh! What a racket.

I heard him too "The Moor, I know his trumpet."

If it takes my snoring to make you remember Shakespeare

instead of the dope sheet on the ponies, I hope Ill keep on with it.

Jaaaames! You mustnt be so touchy.

Yes, for Petes sake, Papa! The first thing after breakfast! Give it a rest, cant you?

Your father wasnt finding fault with you.

- You dont have to always take Jamies part.

- Youd think you were the one ten years older

- That's right forget everything and face nothing

that's a convenient philosophy in life if you've no other ambitions... than...

What were you two grinning about like Cheshire cats when you came out?

What was the joke?

You remember, Papa, the ice pond on Harkers estate is right next to the farm,

and you remember Shaughnessy keeps pigs.

Well, it seems theres a break in the fence and the pigs have been bathing in the millionaires ice pond,

The poor pigs, Shaughnessy yelled, had caught their death of cold.

Many of them were dying of pneumonia, and several others had

been taken down with cholera from drinking the poisoned water.

He told Harker he was hiring a lawyer to sue him for damages.

but he was an honest man who had to draw the line somewhere,

and hed be damned if hed stand for a Standard Oil thief trespassing.

So would Harker kindly remove his dirty feet from the premises before he sicked the dog on him. And Harker did!

Heavens! What a terrible tongue that man has.