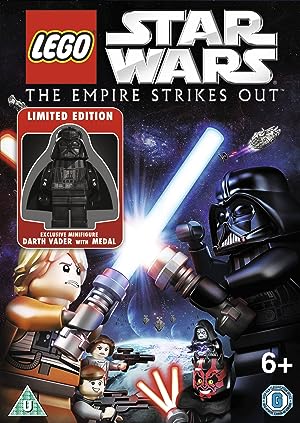 Synopsis: Luke Skywalker embarks on a mission to find and destroy an Imperial base on Naboo, but is relentlessly chased by a group of fanatic girls, who think of him as a celebrity for destroying the Death Star. Meanwhile, Darth Vader engages a "sibling" rivalry with Darth Maul, in order to prove he's the best Sith Lord to Emperor Palpatine.
Genre: Action, Animation, Short
Director(s): Guy Vasilovich
Actors: Anthony Daniels, Kenneth Colley, Brian Blessed, Julian Glover
2 nominations.

covered surface. An explosion marks the point of

A weird mechanical sound rises above the whining of the wind. A

strange probe robot, with several extended sensors, emerges from the

smoke-shrouded crater. The ominous mechanical probe floats across the

snow plain and disappears into the distance.

A small figure gallops across the windswept ice slope. The bundled

rider is mounted on a large gray snow lizard, a Tauntaun. Curving

The rider gallops up a slope and reins his lizard to a stop. Pulling

off his protective goggles, Luke Skywalker notices something in the

sky. He takes a pair of electrobinoculars from his utility belt and

through them sees smoke rising from where the probe robot has crashed.

transmitter. His Tauntaun shifts and moans nervously beneath him.

old buddy, do you read me?

After a little static a familiar voice is heard.

Loud and clear, kid. What's up?

Well, I finished my circle. I

don't pick up any life readings.

There isn't enough life on this

The sensors are placed, I'm going

There's a meteorite that hit the

ground near here. I want to check

it out. It won't take long.

Luke clicks off his transmitter and reins back on his nervous lizard.

He pats the beast on the head to calm it.

matter? You smell something?

suddenly a large shadow falls over him from behind. He hears a

him. It is a Wampa Ice Creature, lunging at him ferociously.

Luke grabs for his pistol, but is hit flat in the face by a huge white

claw. He falls unconscious into the snow and in a moment the terrified

across the frozen plain.

their new base. The rider, Han Solo, swings off his lizard and pulls

He walks into the main hangar deck toward the Millennium Falcon, which

is parked among several fighters. Mechanics, R2 units, and various

other droids hurry about. Han stops at the Millennium Falcon where his

Wookiee copilot, Chewbacca, is welding on a central lifter. Chewie

stops his work and lifts his face shield, growling an irritated

greeting to his boss.

The Wookiee grumbles a reply.

All right, don't lose your temper.

I'll come right back and give you

ice. The low-ceilinged room is a beehive of activity. Controllers,

troops, and droids move about setting up electronic equipment and