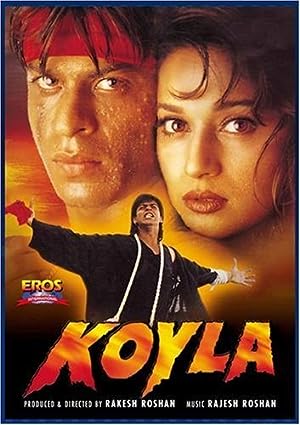 Synopsis: Mute Shankar slogs day and night to satisfy the lust of wealthy businessman Raja Saab who has underworld contact. Raja Saab would like to marry the young and street-wise, Gauri, however Gauri would like to see a picture of her would be husband but is instead shown Shankar's picture, she immediately falls in love with him and agrees to marry but at the wedding altar, Gauri gets a shock when she sees Raja Saab, refuses to continue with the rituals of the marriage and is locked forever in a room. Circumstances forced Shankar and Gauri to elope but both is caught by Raja and his men, who beats Shankar and throw him to his death and Gauri is taken back to Raja Saab mansion and must undergo preparations to get married to him.
Genre: Action, Drama, Musical
Director(s): Rakesh Roshan
Actors: Shah Rukh Khan, Madhuri Dixit, Amrish Puri, Ranjeet
Production: Film Kraft Productions
1 nomination.

Rajasahib, who is this boy?

He is the most faithful slave I have.

If measured on a scale..

.. the combined loyalty of my dogs.

Hats off to you! - You've got to appreciate him!

Who instilled courage in him? Rajasahib!

Who transformed a weakling into a man of steel? Rajasahib!

There's chaos! The labourers have stopped working in the coal mines.

Why? Has a fire broken out in the mines?

Your younger brother is inflamed with anger.

He is badly thrashing a labourer.

Don't beat my father! Leave him!

Please do not beat my father!

Brother, she was walking with a pot on her head.

I liked her, so I caught her hand.

Why did you raise your hand on your beloved brother?

He's been crazy since childhood. - Shut up!

The daughters of all the workers are like my own children.

I am the king; they are my subjects!

After the Lord, they look upon me as their God!

I have witnessed justice similar to that given..

.. during the regime of Emperor Jehangir!

Where a brother has hit a brother!

When Brijwa was being slapped, I was deeply anguished!

If I am lying, then may the mad dogs of the village..

I was having `Zarda Gopal Gold'. My words are real bold!

I am Mr. Tol Mol. Talking in riddles..

.. and divulging secrets, is what I do!

What rubbish are you talking?

I am talking about the history of this village.

Since ages, man has been buying women. Look, there goes the old man!

He's giving tablets to the old men to revitalize them!

He's calling you by your real name. You are stupid, and I'm your son!

Hey, why are you indulging in buffoonery with this puppet?

Look at how I'm carrying on the ancestral profession of a physician!

By fleecing the rich!

Shut up! - Excuse me, boost my spouse's power.

She's talking about the power of the tablets..

..you had given the last time.

Yes, those tablets were ineffective.

Watch, I'll give you such potent tablets this time that..

Father, why are you destroying their lives?

I am igniting the flames of youth in them.

No, you are not. You are igniting wet sticks in the rain!

Only smoke will be emitted! - Why?

Because you are playing a `sitar' with a broken string!

The `sitar' is completely out of order!

This model will not work.. am I right, madam?

You are right. I'm trapped.

Hey, will you just keep on talking? Have you had something or not?

I'm giving them something to eat. You serve them the drinks.

Give it to me.

The party is on, but where is Rajasahib?

You caused me to beat my Brijwa.

So I shall slice you apart now.

But your brother molests our daughters..

The moment your child is conceived in the womb.

It becomes my slave!

I shall do what I please!

I'll use your wife, daughter and daughter-in-law, the way I want to!

They are my property!

No, sir. I will protest! I surely will!

Feed him to the animals.

What are you doing here? What did you see?

What did you see?.. Answer!

What did you see?

What did you see? Answer!

He's seen something but isn't divulging it.. Answer!

Has he ever spoken a word?

Do the mountains ever speak?

One needs a voice to speak. Where will this lad get it from?

This poor lad is mute.

I know that he is mute, but he has witnessed it. Ask him!

Sachin Bhowmick (Bengali: শচীন ভৌমিক; 17 July 1930 – 12 April 2011) was an Indian Hindi film writer and director. Writing was his main work and he wrote stories or screenplays for over 94 films. He is best remembered for directing the light romantic black comedy classic Raja Rani (1973). He was also a regular contributor to Ultorath, a Bengali magazine on cinema. Due to the Bengali pronunciation of his surname Bhaumick we will find his surname spelled as Bhowmick in numerous sites. more…

Discuss this Koyla script with the community: