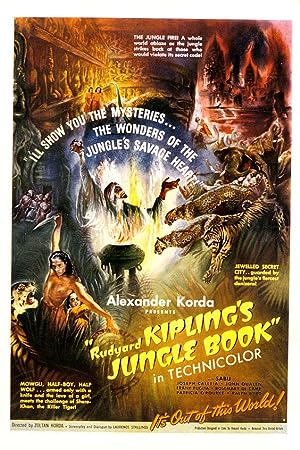 Synopsis: Teenaged Mowgli, who was raised by wolves, appears in a village in India and is adopted by Messua. Mowgli learns human language and some human ways quickly, though keeping jungle ideas. Influential Merchant Buldeo is bigoted against 'beasts' including Mowgli; not so Buldeo's pretty daughter, whom Mowgli takes on a jungle tour where they find a treasure, setting the evil of human greed in motion.
Genre: Action, Adventure, Family
Director(s): Zoltan Korda
Actors: Sabu, Joseph Calleia, John Qualen, Frank Puglia
Production: Gravitas
Nominated for 4 Oscars. Another 1 win.

Look at that beautiful old man,

what a lovely head

with the yellow turban,

His is like the head of John the Baptist

Memsahib, refers to the story teller

Are these silent monsters in peace with us

It is but a truce they keep with men

But I, who have seen the task stained

I could tell you a tale of the silent ones

for a few coppers

For a bowl of rice

What would you do with my image memsahib

I would keep it, for a memory of India

verily, you will have all India in your picture

Nay, you would have The Book of The Jungle

to read in my eyes

In the beginning, you must think

of nothing but silence,

a silence so vast that ears can't hear it

While above, under the dome of heaven

where live the winged ones

across the roof of the world

These are the eaters of grass in a world

early the little fawns must learn the lesson,

Feet theirs make no noise,

eyes that see in the dark,

ears that heard the Leopard

But Leopard lays by the law of claws

and horns and fang,

he will kill for hunger, and eat there all,

a law that all men break

These are the lords of the jungle,

the Silent ones, they go their way,

eaters of grass in a world of carnage

But the Wolfs are the true hunters of the jungle

and likes hunt while stick to their clan

with a strict regard for hunting

three companion of the woods,

they may fight and quarrel

among their selfs and the strongest

wolf must take the leadership

Yet jungle folks says that the wisest

among them is the tribe of Balu the bear

He is a teacher of the jungle law

Yet there is one who knows no law

the barrel border mudguard, the Crocodile

with his chin in his shallows

and lust in his cold hearth

hopping to drag dawn to the deeps

all who wonder in his river banks

And in the legends of the jungle

there is a black creeps

shredders to the law of claw, horn and fang

disposers of buffalos, as reckless

but the voice is soft as wild

honey dripping from the tree

and prier and master and afraid

And now behold the villain of my tale

over spread murderous through the jungle clans

It is said that when the first kill

when he was king of a poor able of the glades

when he run from the scene of

the trees and creepers whip him

with their branches and straight

his yellow eye with the mark of Cain

This evil law they must have it's

and the hyena, hungry for the scraps

of the murderers masters feast

But my tale is not alone about outcast and heroes

I will tell you also of rock snake Kha,

the Oracle who thought mother Eve's

speech menus for treachery and sin

What is the book of life itself

but men bows at nature,

the struggle between village and jungle

under the mantle of wild creepers

in the pages of time

where a thousand war chariots

before whom all men bow their heads

nothing remains but a tradice

for wild flicks some apart

But what of the great Maharaja

the loser in this battles

he has left many such palaces

to his cousins the monkey pack,

the bender logs, the outcast of the jungle

Laurence Tucker Stallings (November 25, 1894 - February 28, 1968) was an American playwright, screenwriter, lyricist, literary critic, journalist, novelist, and photographer. Best known for his collaboration with Maxwell Anderson on the 1924 play What Price Glory, Stallings also produced a groundbreaking autobiographical novel, Plumes, about his service in World War I, and published an award-winning book of photographs, The First World War: A Photographic History. more…

Discuss this Jungle Book script with the community: