Credits run in counterpoint through a 7 to 10 minute sequence

of documentary images setting the tone of John F. Kennedy's

Presidency and the atmosphere of those tense times, 1960

through 1963. An omniscient narrator's voice marches us

Eisenhower's Farewell Address to the

The conjunction of an immense military

establishment and a large arms

industry is new in the American

is felt in every city, every

statehouse, every office of the

Federal Government... In the councils

of government we must guard against

the acquisition of unwarranted

influence, whether sought or unsought,

by the military industrial complex.

The potential for the disastrous

rise of misplaced power exists and

will persist... We must never let

the weight of this combination

endanger our liberties or democratic

processes. We should take nothing

School kids reciting the Pledge of Allegiance. WPA films of

dusty car coming from far away on a road moving towards

Dallas. Cowboys round up the cattle. Young marrieds in a

church. Hillsides of tract homes going up. The American

breadbasket, the West. Over this we hear Eisenhower's

address. As we move into the election campaign of 1960, we

Against this is juxtaposed other forces: segregation, J.

ending with the Kennedy inauguration and the irony of Earl

Warren administering the oath as he will Kennedy's eulogy.

Kennedy of Massachusetts wins one of

the narrowest election victories in

American history over the Vice-

President Richard Nixon by a little

abound that he stole the election in

Illinois through the Democratic

At his inauguration, at a time when

his hair blow free in the wind.

Alongside his beautiful and elegant

Bouvier, J.F.K. is the symbol of the

new freedom of the 1960's, signifying

change and upheaval to the American

public, scaring many and hated

passionately by some. To win the

election and to appease their fears, 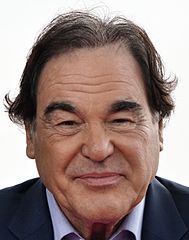 William Oliver Stone (born September 15, 1946) is an American film director, screenwriter, and producer. Stone came to public prominence between the mid-1980s and the early 1990s for writing and directing a series of films about the Vietnam War, in which he had participated as an infantry soldier. Many of Stone's films primarily focus on controversial American political issues during the late 20th century, and as such that they were considered contentious at the times of their releases. more…