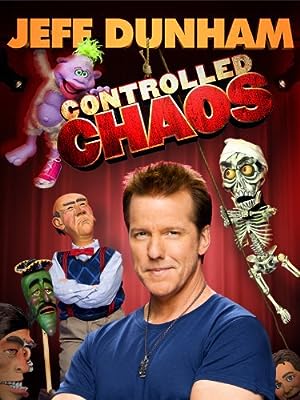 Synopsis: Jeff Dunham is back in his much-anticipated fourth concert event, with all-new material and unparalleled comedy that surpasses his record-breaking specials Arguing with Myself, Spark of Insanity, and A Very Special Christmas Special. All the favorites are here, plus two never-before-seen characters certain to unleash their own unique havoc on stage. Dunham is an international phenomenon with sold out stadium concerts, one-half billion YouTube views, and television shows that remain among the highest rated in Comedy Central history. Controlled Chaos is guaranteed to deliver an unequaled number of laughs per minute - whether you're a Dunham Maniac or seeing him and his partners for the very first time.
Genre: Comedy, Documentary
Director(s): Michael Simon, Matthew McNeil
Actors: Jeff Dunham

JEFF DUNHAM:
I can't believe the show starts in half an hour and Achmed's late.

JEFF DUNHAM:
Wait. Achmed's late. Keep an eye out for him.

JEFF DUNHAM:
Where could he be?

Walter:
He went from dead terrorist to Hollywood diva.

I'm telling you, the fame went to his skull.

Achmed:
It's the AchmedMobile, you idiot. Just be careful parking it or I keel you.

Achmed:
And whatever you do, don't touch the red button.

Bubba J:
Got it. Touch the red button.

JEFF DUNHAM:
Thank you. Thank you so much.

Thank you very much. Ladies and gentlemen, it's

absolutely great to be here in lovely Richmond, Virginia.

And, you know, we- I've been doing this show all over the country, just having a blast here, there and everywhere.

The fans are great. But we've also been taking my show around the world. We've been doing shows in South Africa, Australia, three tours of Europe and the U.K.

Now they're talking about taking me to China.

You'll recognize it when I do it here this evening.

But it is interesting going to some of these foreign countries and doing press interviews, because some of the reporters have done their homework and care,

others just don't. For example, I was in London

(British accent): "All right, so ventriloquism- have you eliminated every other possibility of employment?"

And I have to go, "No, this is what I've done my entire life." I've never wanted to do anything else. I started very young. I was eight years old, I was in the third grade,

Christmas, 1970. Got my first dummy. There's Mom and Dad and me under the tree right there.

You can see how proud my father is.

But for years I'd look at that picture and I'd think, why does he have that expression on his face? And then if finally hit me, duh, look where the dummy's hand is. So...

All the way through elementary school, junior high,

high school, college. And this is what I wanted to do.

This was the future I saw. I saw it. There were a few people that didn't see it. For example, girlfriends.

They'd realize I was sincere about wanting to talk

to dummies the rest of my life, and they would dump me

immediately. I couldn't see what they saw until a few months ago. I was sitting down with my three daughters,

and we were looking at the yearbooks

from my junior high and high school years. My daughters were horrified. Why? Let me explain. I started getting paid for doing my shows in the seventh grade.

And I knew that if I was going to be a professional ventriloquist, I needed a professional photo. Now my parents were supportive, but they weren't going

to shell out the cash for that. So I thought, how am I going to get a professional picture of me and a dummy taken? And then it finally hit me, school picture day.

Jeffrey "Jeff" Dunham (born April 18, 1962) is an American ventriloquist and comedian who has also appeared on numerous television shows, including Late Show with David Letterman, Comedy Central Presents, The Tonight Show and Sonny With a Chance. He has six specials that run on Comedy Central: Jeff Dunham: Arguing with Myself, Jeff Dunham: Spark of Insanity, Jeff Dunham's Very Special Christmas Special, Jeff Dunham: Controlled Chaos, Jeff Dunham: Minding the Monsters, and Jeff Dunham: All Over the Map. Dunham also starred in The Jeff Dunham Show, a series on the network in 2009.His style has been described as "a dressed-down, more digestible version of Don Rickles with multiple personality disorder". Describing his characters, Time magazine said, "All of them are politically incorrect, gratuitously insulting and ill tempered." Dunham has been credited with reviving ventriloquism, and doing more to promote the art form than anyone since Edgar Bergen.Dunham has been called "America's favorite comedian" by Slate.com, and according to the concert industry publication Pollstar, he is the top-grossing standup act in North America, and is among the most successful acts in Europe as well. As of November 2009, he has sold over four million DVDs, an additional $7 million in merchandise sales, and received more than 350 million hits on YouTube as of October 2009 (his introduction of Achmed the Dead Terrorist in Spark of Insanity was ranked as the ninth most watched YouTube video at the time). A Very Special Christmas Special was the most-watched telecast in Comedy Central history, with its DVD selling over 400,000 in its first two weeks. Forbes.com ranked Dunham as the third highest-paid comedian in the United States behind Jerry Seinfeld and Chris Rock, and reported that he was one of the highest-earning comics from June 2008 to June 2009, earning approximately $30 million during that period. Dunham also does occasional acting roles. He achieved the Guinness Book of World Records record for "Most tickets sold for a stand-up comedy tour" for his Spark of Insanity tour, performing in 386 venues worldwide. more…

Discuss this Jeff Dunham: Controlled Chaos script with the community: