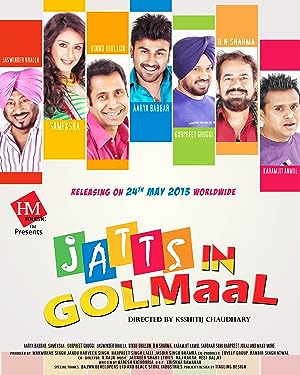 Synopsis: Binnu Dhillon plays a gang leader who has a heart problem. The doctor recommends him to get a new heart transplant. Unable to find any healthy donor in his gang, due to some sort of a drinking or drug abuse problem with each member of his gang, he convinces the character played by Arya Babbar, the protagonist of the film, for heart donation. Arya Babbar is in the need of money to go to Canada. He is a simpleton and somewhat dumb and therefore do not understand that he will die without the heart. Binnu is behind Aarya's heart and Aarya's uncle (Jaswinder Bhalla) and his friend Gurpreet Ghuggi, trying to save his heart.
Genre: Comedy
Director(s): Ksshitij Chaudhary
Actors: Arya Babbar, Binnu Dhillon, Gurpreet Ghuggi, Jaswinder Bhalla
Production: JC Entertainment

Hurry up! - Don't worry. Nothing will happen to you.

I'm not dead. You're the one who is going to die!

I don't have jaundice! Why have you kept me under the sun!

Oh damn, Titu is left behind. Reverse it fast.

They are back! They're back.

Hey, you forgot his uncle!

Take his uncle with you!

Stop! Stop! You forgot the uncle!

Doctor! Doctor, what's it with patient?

A girl is born.

No! How is that possible!

Your brother had a daughter. - A girl!

Why didn't you die before doing such a deed? - Brother...

And you are trying to reason it with me!

Damn you! - Brother, Shakuntala had a daughter.

Titu is in ward number two.

They didn't you say that earlier?

He is gonna be daed? - He has a hole in his heart.

...or we wouldn't be able to get him treated.

Because of a hole 60 percent of his heart is damaged.

It is a very serious condition.

Nephew, see, the coins that you swallowed in your childhood...

...have caused a hole in your heart.

Uncle, it's a heart not a pocket to have holes due to coins.

Brother, this is the punishment you got for selling drugs.

Why take people's to curse? - What kind of a sister are you?

Your brother is on his deathbed and you are making him worry!

You should rather encourage him.

I am unable to do it, otherwise I would've become...

...an informant and get the police to seize everything.

Brother, heart isn't on right but it's on the left side.

I'll still say lead the life that you...

...are left with in an honest manner.

What can this poor illiterate boy do?

Should he start sweeping the floors of your cheap pilot school?

It's IELTS not pilot.

The one that you call cheap is the source of my honest living.

I don't strive on your illicit earnings.

When your mother was pregnant with her...

So this had to happen.

Uncle, tell me what's to be done about me?

What will I do! I'm educated only till the fifth grade!

You want me to operate on you?

My blood pressure rises because of such things that you say!

We'll have to do a heart transplant.

It's not lamination but the transplant of the heart.

I mean we'll have to put someone else's heart in him.

Remove from anyone of them and put in me.

The guys who are under your damn tutelage...

...all there reports are with me.

Half of them have a heart problem.

The other half has kidney failure. - Your uncle gets fits.

Get lost, uncle. You're never of any use.

And it's also a crime to remove a living persons heart.

Doctor, have you done law along with medicine?

No. - Then don't give us any legal advice.

Whether we get someone dead or alive...

...but you'll get a person to take the heart out from.

Uncle, from where will we find a person...

...who will agree to give me his heart?

So, should I switch it on?

Do it if you are in such a hurry.