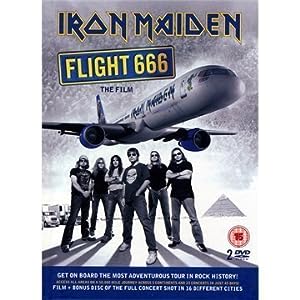 Synopsis: Come fly with Iron Maiden and enjoy the hospitality of Flight 666 as the boys' take on the biggest tour of their career, flying around the world in their own private Boeing 757. This insight into the background noise that is the logistical workings' of the '2008 Somewhere Back in Time' World Tour is captivating, both behind the scenes as well as on stage. Performing in front of sell out crowds, this "Rocumentary" is an insight into the minds, bodies and souls of the family that is Iron Maiden.
Genre: Documentary, Music
Director(s): Sam Dunn, Scot McFadyen
Actors: Iron Maiden, Vinny Appice, Pat Cash, Bruce Dickinson

We shall go on to the end.

we shall fight in France.

we shall fight on the seas and oceans.

we shall fight with growing confidence

and growing strength in the air.

we shall defend our island.

whatever the cost may be.

we shall fight on the beaches.

we shall fight on the landing grounds.

we shall fight in the fields

and in the streets.

we shall fight in the hills.

we shall never surrender.

and I'm at Stansted Airport in England.

I'm here because my favourite band.

Iron Maiden. has invited us

to film the first leg of their

Somewhere Back In Time world tour.

This tour is based on the classic

which is back when I first became a fan.

That's a thing of beauty.

Over the next six weeks.

and watch them play 21 cities

in 1 2 countries across 4 continents.

And what's even more impressive

is that lead singer Bruce Dickinson

is flying the plane.

The aeroplane idea started off

as a crazy gleam in my eye.

I went. "Wow. if you could get

all your gear into an aeroplane.

"you could cut down hugely on the amount

of dead space we have in touring."

So I said. "What if you join up

"all the countries that accountants say.

'cause we've got our own magic carpet.

The idea of especially modifying a plane

and over 1 2 tons of equipment.

has never been attempted before.

This could be the most ambitious tour

and everyone seems a little nervous

to see if they can pull it off.

When you're going round the world

and you're trying to combine

passenger and freight on the same plane.

on that level it's very hard.

We knew what we had to do.

we had to get the engineers involved.

to make sure the plane

could stand that stress.

of flying with that much freight in the back.

To get all of that together took a year.

Everything else was in place.

We'd got the visas and the equipment.

The only thing we hadn't got

was the authorization to fly the plane.

I was the nut in the nutcracker. as it were.

Because when it came to that morning.

and we still hadn't signed the papers

we needed to get the aeroplane airborne.

I was in a stressful place.

Tire was a little bit flat this morning.

but just as a precaution

we put a new wheel on it.

Is that the young man

who brought the wine?

Take your hands out of your pocket.

How come we shouldn't have

our hands in our pockets?

'Cause it shows a slovenly attitude.

the type of attitude that is easily

Ian. what did you tell me to do

with the documentary people

if they annoyed me?

He said I've got to be nice to you.

They've never had a camera crew

come into their lives. who are outsiders.

And we don't really know what to expect.

As we drove into the airport

there was you guys with the cameras

and Rob was telling us to be nice to you.

"Get that camera out of my face!"

I didn't sleep a lot the night before.

when you were a kid.

and getting anxious and don't want

to go to bed. just want to go away.

Sam Dunn (born 20 March 1974) is an award-winning documentary filmmaker, Canadian musician, and anthropologist best known for his series of documentaries on heavy metal music. He co-owns Toronto-based production company Banger Films with Scot McFadyen. Dunn holds a bachelor's degree in anthropology from the University of Victoria and a master's degree from York University where his thesis work focused on Guatemalan refugees.Dunn's first documentary film, Metal: A Headbanger's Journey, won a Gemini Award for Best Writing in a Documentary. His additional credits include the Grammy-nominated Rush: Beyond the Lighted Stage and Super Duper Alice Cooper, winner of Best Feature-Length Documentary at the Canadian Screen Awards. Dunn co-directed and hosted the biggest-ever TV series on the history of heavy metal, Metal Evolution, which reached #1 on VH1 Classic (USA) and M3 (Canada), and most-recently co-directed the Netflix original series Hip-Hop Evolution which has been awarded a Peabody, an International Emmy, and a Canadian Screen Award. more…

We're doing our best to make sure our content is useful, accurate and safe.
If by any chance you spot an inappropriate comment within your search results please use this form to let us know, and we'll take care of it shortly.