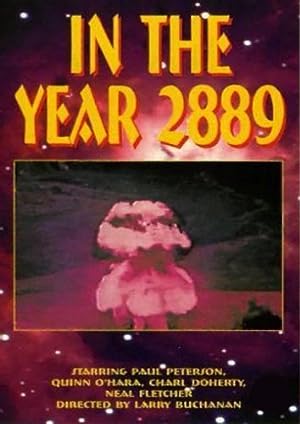 But the day of the Lord will come

as a thief in the night,

in which the heavens shall pass away

with a great noise.

And the elements shall melt

and the works that are therein,

shall be burned up.

The geiger counter here in the studio

Down through the ages, the prophets

have forewarned us that in one day

thousands of years of

wiped away by the destructive hand of power.

Now that day has come.

All communication with the outside world has stopped,

just 15 hours after the first nuclear bomb fell on Formosa.

The whole world has been silenced,

Three billion people murdered by a thousand nuclear bombs and the lethal fallout.

Maybe there's no one left to hear my voice,

no living human being to record the end of the world.

He's lost. They're all lost.

Why, we may be saved! Just as I planned it.

I planned it right, Joanna.

Our house out here, miles from any city. The cliffs.

The updrafts of air to fight back the radiation.

And provisions for the three of us for months.

There's only two of us now, Dad.

I couldn't very well order Larry to come out here and stay with us, even though you are engaged to him.

There's someone at the door, Dad. It's Larry, he's made it!

- Wait! Don't open that door until you're sure it's Larry!

I've got to open that door!

Why, he should be dead!

But he's still breathing! Nobody can take that much and still live.

Don't touch him. He's my responsibility.

Better keep away from him.

Where are the bedrooms?

- Upstairs. Come with me.

It's too late for them. But not us.

I'll get you some water and clean clothes.

Throw your weapon on the floor.

Move on into the room, here. Come in where I can see you.

- Are you all right?

- Of course you can't stay!

- I've got provisions for only three people.

You can't stay here! It isn't the way I planned it. I have provisions for three people only.

I'm Joanna Ramsey. Please, bring your suitcase upstairs and I'll get you some fresh water.

I was just looking to see if anyone was alive in the house.

I'm Tim Henderson. I'm a rancher. I live up on the cliff.

- Sorry I roughed you up.