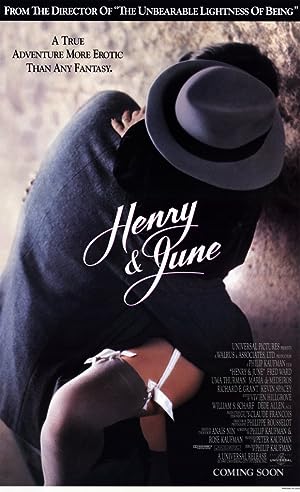 Synopsis: In 1931 Paris, Anais Nin meets Henry Miller and his wife June. Intrigued by them both, she begins expanding her sexual horizons with her husband Hugo as well as with Henry and others. June shuttles between Paris and New York trying to find acting jobs while Henry works on his first major work, "Tropic of Cancer," a pseudo-biography of June. Anais and Hugo help finance the book, but June is displeased with Henry's portrayal of her, and Anais and Henry have many arguments about their styles of writing on a backdrop of a Bohemian lifestyle in Paris.
Genre: Biography, Drama
Director(s): Philip Kaufman
Actors: Fred Ward, Uma Thurman, Maria de Medeiros, Richard E. Grant
Production: MCA Universal Home Video
Nominated for 1 Oscar. Another 1 win & 3 nominations.

It began so innocently. | They said it was strange a woman...

would want to publish a defense | of D.H. Lawrence...

and that his words are considered | an incitement to sex.

You must've led a rather free life.

You must've had a lot | of experience.

I suppose my real awakening | came when my husband Hugo and I...

first arrived in Paris | and rented a bachelor apartment...

One day, I was tidying up.

As I was going through the closets...

where the owner left his belongings...

Are you all right, Pussy Willow?

It was just one kiss.

He kisses me once.

Then he caresses all of my body.

He seeks my breasts...

and my most secret, | sensitive part.

His hands are deft.

I let him release his desire | between my legs.

only part of the story.

Oh, Hugo, would you mind very much | if I didn't go this evening?

I'm sorry, but all they talk about are | bad loans, trusts or estate planning.

Estate planning can be very creative!

Look, the bank is how we got to Paris.

I need this job and I admit | I sometimes enjoy it. Why not?

You're changing into someone else.

You are even beginning to smell | like the bank.

I'm working so you can write.

I need to know people who are alive.

You're not consummating. | You're holding back.

My life? Sometimes I think | I need something else.

An older man, | a man stronger than I am.

I've loved you | since we were children, Anais.

I wouldn't be able to.

Look at them. | They're so exquisite.

Hell of a place you got here, Hugo. | Peaceful.

This is Henry Miller, the American | writer Osborn is putting up. My wife.

Anais, you ought to read Henry's stuff. | He's got it over D.H. Lawrence.

- I'd love to read what you've written. | - Henry hasn't been published yet.

And you're comparing him to Lawrence?

I don't want to be compared to Lawrence. | He would've hated the way I write.

- Henry writes for the man on the street. | - I don't care for his writing.

Anais has been writing a book | about Lawrence.

Perhaps his sexuality | is too strong for you.

The French have been writing | about this. Rabelais, Flaubert!

I can't imagine any modern writer | not to owe a debt to Lawrence.

He makes too much out of sex. | He makes a damn gospel out of it.

I'm not interested in literature | or poetry as we know it.

- It's definitely about fucking. | - We should eat something.

Philip Kaufman (born October 23, 1936) is an American film director and screenwriter who has directed fifteen films over a career spanning more than five decades. He has been described as a "maverick" and an "iconoclast," notable for his versatility and independence. He is considered an "auteur", whose films have always expressed his personal vision.His choice of topics has been eclectic and sometimes controversial, having adapted novels with diverse themes and stories. Kaufman's works have included genres such as realism, horror, fantasy, erotica, Westerns, underworld crime, and inner city gangs. Examples are Milan Kundera's The Unbearable Lightness of Being (1988), Michael Crichton's Rising Sun (1993), a remake of Invasion of the Body Snatchers (1978), and the erotic writings of Anaïs Nin's Henry & June. His film The Wanderers (1979) has achieved cult status. But his greatest success was Tom Wolfe's true-life The Right Stuff, which received eight Academy Award nominations, including Best Picture. According to film historian Annette Insdorf, "no other living American director has so consistently and successfully made movies for adults, tackling sensuality, artistic creation, and manipulation by authorities." Other critics note that Kaufman's films are "strong on mood and atmosphere," with powerful cinematography and a "lyrical, poetic style" to portray different historic periods. His later films have a somewhat European style, but the stories always "stress individualism and integrity, and are clearly American." more…

Discuss this Henry & June script with the community: