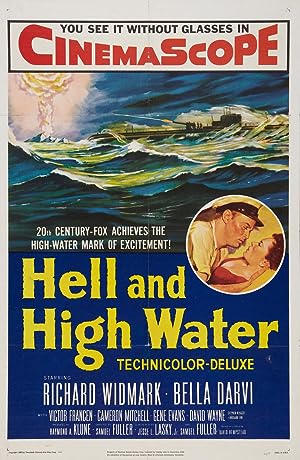 it was announced that an atomic bomb | of foreign origin...

had been exploded somewhere | outside of the United States.

Shortly thereafter, it was indicated | that this atomic reaction...

according | to scientific reports...

had originated in a remote area | in North Pacific waters...

somewhere between the northern tip | of theJapanese islands...

and the arctic circle.

This is the story | of that explosion.

I understand that you're going to Vienna | to address the, uh...

I will read a paper on the emission of neutrons | and collision of nuclei.

- Will any of the American Atomic Energy Commission be present? | - I doubt it.

Will you excuse me, | gentlemen?

Uh, Professor. Excuse me. | There's one or two points I'd like to get clarified.

You will have to excuse me, gentlemen. | The plane is waiting.

This is the BBC with the latest news bulletin.

has vanished while en route to attend | a conference in Vienna.

Professor Montel's disappearance | is a complete mystery to the police.

is the fifth noted scientist believed to have | vanished behind the iron curtain.

Professor Montel was last seen | at the International Airport in Vienna.

Speculation as to the whereabouts...

Ten days have elapsed | since the distinguished scientist vanished...

and so far police have been unable to offer | any explanation.

that Professor Montel | was not kidnapped...

and that his disappearance | was part of a prearranged plan.

Airport officials in Vienna | reveal that the scientist...

The search for Professor Montel | continues into the fourth week.

It is interesting to note that while | the story has been given front-page space...

in newspapers in the United States | and all other parts of the free world...

Pravda, the official mouthpiece | of the Soviet Union...

You're a dead ringer for an officer | I used to know in the submarine service.

My name is Eddy.

There is a taxi waiting for you. | The driver knows the address.

Wait a minute. What if I need you again? | Where can I find you?

I'm very pleased | to meet you.

Thanks. For a minute there, I thought this was | something out of Inner Sanctum.

- Dead? | - His plane crashed returning from an arctic expedition.

It's an advance payment for a job | Captain Taylor was certain you would do for us.

Discuss this Hell and High Water script with the community: