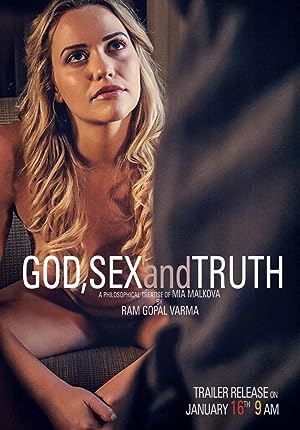 Synopsis: Mia Malkova delivers a monologue about her sexuality, the role of women in society and the patriarchal bonds that attempt to tie them.
Genre: Drama, Short
Director(s): Ram Gopal Varma
Actors: Mia Malkova

WEBVT I as a woman,

am not my eyes,

and not my asshole.

I am a conscious being

and each and every part of my body

is a nature given asset

Sexual pleasure is an incentive given by God

so that men and women will copulate

which in turn will facilitate

the continued existence of our species

just for the sake of having children.

They do so because they get

an immense pleasure out of it.

I believe that power and

sex are the only true prime movers in life.

But Power is looked up to

Sex has always been looked down upon

Right from the medieval times

some men consciously for social reasons

assumed upon themselves to culturally change

the fundamental validity of our sexual code.

the pleasure of intercourse to so called

Spelling out the code of tradition as a whole

they even managed to psyche people into believing

that even the very sight of a cunt

and an asshole are obscene.

But mostly and very damagingly

they employed moral and religious interpretations

to suit the prevailing social needs of that time

and one of them was to ensnare a womans sexuality.

To achieve this they used the force of the body,

the mind and above all the force of guilt in

a woman's own mind

which would be the most powerful

because civilizations always have a

about whatever feels good.

And then unable to deal with the rebelliousness

which rose against those restrictive codes

and the frustrations all around

they blamed them on the failures of the

individuals to abide by the code

by hiding the fact that the failure was in the very code itself.

Two bodies attract each other directly as the

product of their nature driven instinct

and inversely as the square of their psychological

distance that they want to rapidly close in.

but it is actually a rule of connection

which is the only true natural authority,

that can and should govern the emotion

of both love and sexual desire.

It should never be what it is.

It should always be what it could be,

and what it should be said, Ayn Rand.

could be is an aim while

should be is a destination.

A woman is not a property,

and any who think otherwise are just slave drivers.

A woman to be restricted to just one man is being

barbaric to the very existence of her sexual being

because she is being restricted from being herself.

Any man, no matter how strong he is, will go weak in his

knees in his desire to be inside a womans cunt.

From the advent of the homo sapien species till today

mankind has made massive advances be it

and whatever else chosen.

But it couldnt invent a single thing which

Realising this very early on

I guiltlessly have pursued sexual pleasure

and I truly believe that sex for me is the

most important part of me feeling alive.

I just hope and pray that some day will come,

a true liberation in the whole world.

A Liberation leading to the ultimate sexual celebration.

which offered me that ultimate heaven.

Ever since I was sexually awakened

I was obsessed with sex.

Obsession is nothing but

an intense focus on an object of desire

and my obsessive desire for a man