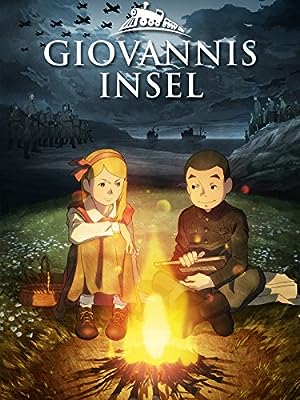 Synopsis: In the aftermath of the most devastating conflict mankind had ever experienced, the tiny island of Shikotan became part of the Sakhalin Oblast... and on the unhealed border in this remote corner of the world, friendship among children from two different countries timidly blossomed, striving to overcome language barriers and the waves of history. Inspired by true events.
Genre: Animation, Drama, History
Director(s): Mizuho Nishikubo
Actors: Tatsuya Nakadai, Yukie Nakama, Yûsuke Santamaria, Tatyana Sharko
1 win & 2 nominations.

A Japan Association of Music Enterprises

50th Anniversary Project "But what is it that will make

with new-found energy. from Kenji Miyazawa's

"Night on the Galactic Railroad" How many years

have passed since then? That was the year

we travelled to Shikotan, the island where

we once lived. To our old home,

full of so many memories. To our lost island. Miss Sawako, we're almost

at the island. So we are. We've finally come back.

of memories, doesn't it? Not for me. I get rid of things I don't want

to remember with an eraser. Can you, though? I suppose not. You can't get rid of them. I can't forget,

even if I want to. I'm sure it's the same

for you, Junpei. I suppose it is. Our old home. The island

where stars fall to Earth. The island of the Galactic Railroad.

Look at me! No one's home! - You can have the floaters, Kanta!

- No fair, Brother! Got 'em. The floaters are the ones

This is an air raid alert! More than 100 dive bombers

are advancing towards Nemuro! Make for the air raid

This is an air raid alert! I wonder if the Dawn Corps boys up in

the mountains will shoot them down? Darn it all. I think they're up too high

for their guns to reach. - Let's go to the shelter.

- Yes, sir. Father, look after the boys. Don't worry, son. My father was the commander

of the island's defense forcr. Well, in fact the real soldiers,

called the Dawn Corps, are holed up

in the mountains. He was basically the head of

as we have our island... As long as our people are still alive,

the country will never fall. What's going to happen

to the country now? The Americans will come

and make everybody into slaves. What? Those Yanks are

red devils, after all. You're joking... There's no telling what they'll do

to you womenfolk if you don't hide. You better paint your faces black

to look like men. Stop trying to scare me! Well, I'm off. Even if we've lost the war,

a fisherman has to fish. I'll have Kanta

do it today. Kanta, will you

for their happiness?' Giovanni, completely despondent,

hung his head. 'Who's to say it wasn't for the best?

However painful a thing might be..."' Our father loved Kenji Miyazawa's

Discuss this Giovanni's Island script with the community: