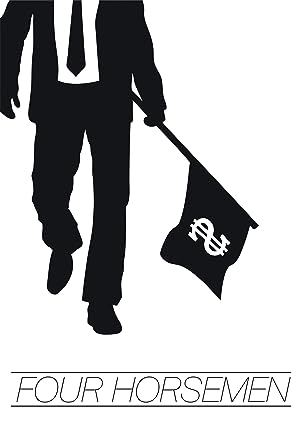 Synopsis: The modern day Four Horsemen continue to ride roughshod over the people who can least afford it. Crises are converging when governments, religion and mainstream economists have stalled. 23 international thinkers come together and break their silence about how the world really works and why there is still hope in re-establishing a moral and just society. Four Horsemen is free from mainstream media propaganda, doesn't bash bankers, criticize politicians or get involved in conspiracy theories. The film ignites the debate about how we usher a new economic paradigm into the world which, globally, would dramatically improve the quality of life for billions.
Genre: Documentary, News
Director(s): Ross Ashcroft
Actors: Dominic Frisby, Gillian Tett, Lawrence Wilkerson, David Morgan
1 win & 1 nomination.

what's been done to them

We are rats in the epochal shift,

there's a point where the west

could tip into a complacent and

quite well off redundancy

or we could play a decicive role in the future

what the banks did was reprehensible

that was why there was the outrage

of the greed of the bankers

when we gave them money that was

supposed to help them lend to others

but they decided to use that money to pay

We are governed by corporations today

often by corporations that don't

have very much interrest in the USA.

I don't know what happened man,

what happened to the the USA

it was so far in the ditch, you know what,

in what moment did it all go bad?

Was it disco,was it Donna Summer,

is that what killed America?`

We are entering the age of consequence

and the looming environmental fallout

are all converging at a time when governments,

religion and mainstream economists have stalled

The Four Horsemen are Coming!

This is not a film that sees conspiracies

It's not a film that mongers fear

It's not a film that blames bankers or politicians

It's a film that questions

and suggests ways to reform them

Over centuries systems have been subtly modified,

manipulated and even corrupted.

Often to serve the interrests of the few

We have continously accepted these changes

because man can adjust to live

under virtually any conditions

The trait that has enabled us to survive

is the very trait that has suppressed us

Most societies have an elite,

and elite tries to stay in power

The way they stay in power is not

by controlling the means of

the production to be Marxist,

in effect controlling the money,

but by controlling the cognitive map,

the way we think.

and what really matters in that respect

is not so much what is said in public

but what is left undebated, unsaid.

For centuries gatekeepers have

but in 1989 a computer scientist

by the name of Tim Burners Lee

It has since unleashed a tsunami of

wrestled for control of

the cognitive map away from an

today the internet is beginning

finance and the media

We are at the cusp of change

But to enact it we must first

that have been left unsaid for so long

to do that we need context from

people who speak the truth

in the face of collective delusion.

because to understand something

is to be liberated from it

In the end of world war 2 we

We we're the new Rome and we recognised it.

We devised the powermanagement scheme in

to what we thought manage it,

it worked fairly well during the cold war

but we havent done anything since,

of our inability to grasp

the new world if you will.

Empires do not begin or end on a certain date

but they do end.

And the west has not yet come to terms

with it's fading supremacy

at the end of every empire,

under the guise of renewal,

and devour the heritage of

In his essay, "the fate of empires,

Ross Ashcroft is a British filmmaker, broadcaster and businessman. He is the host of the Renegade Economist show. more…

Discuss this Four Horsemen script with the community: