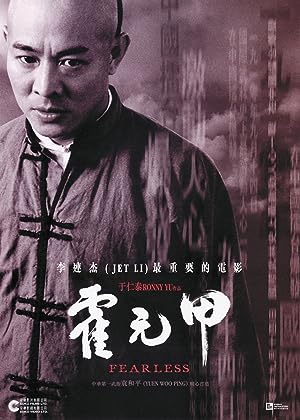 Synopsis: Martial arts legend Huo Yuanjia became the most famous fighter in all of China at the turn of the 20th Century. Huo faced personal tragedy but ultimately fought his way out of darkness and into history, defining the true spirit of martial arts. His self-discovery, and the choices he made, inspired his nation. The son of a great fighter who did not wish for his child to follow in his footsteps, the bullied Huo Yuanjia resolves to teach himself how to fight - and win. Years of training enable him to ace match after match in his home region of Tianjin. But as his fame as a martial arts master grows, so does his pride. After an ill-advised fight leads to another master's death, members of Huo's family are slain in revenge. Grieving and ashamed, Huo wanders the country in shock. Near death, he is rescued by women from an idyllic village, and is offered simple kindness and generosity that help him heal and regain his equilibrium over a period of several years. Huo realizes that the future of
Genre: Action, Biography, Drama
Director(s): Ronny Yu
Actors: Jet Li, Li Sun, Yong Dong, Yun Qu
Production: Rogue Pictures (Focus)
5 wins & 12 nominations.

Towards the demise of Qing dynasty, the chinese

were under siege from foreign invaders

Weak and unable to retaliate, the chinese were

bullied and branded "Sick man of the East"

But no one could stand up to it

a fight between the invaders and its people.

an attempt to rally their morale...

It was then that he surfaced...

And his name is Huo YuanJia

Today, we have four representatives from the

And they will be challenging Huo Yuan Jia

from the School of Jing Wu

The rules for this competition are

The outcome will be determined

by either a knockout or surrender

And for our final round,

"30 years ago, household of the Huo family in Tian Jin"

Who let you in?

I came to bring you some tea, father

How many times have I told you?

Never to come in here again

Go back and practise writing

Damn, why do I have to cheat for you

If your Father ever get to know about this

You will be beaten till you are a pauper!

Nobody will know if we keep this secret

Why are they fighting again?

They're beating the drums again!

Today, Huo En Di from the family of Huo

And Zhao Zhong Qiang from the family of Zhao

Will pit their skills against each other on this stage

What the hell are you two doing? Courting death?

Your Father is going to lose today, for sure!

Your Father's going to get a taste of the Huo fist

The Life and Death agreement has been signed

Victory or defeat is decided amongst men

Life and death is decided by God

Masters! The competition shall begin!

the real strength of our Huo's fist?

And today's winner is...

Thank you, thank you so much!

What's with you? Don't shy away like a rat

Shut up! you're useless

the same goes to your family

Fight with me if you have the courage!

I want to show you the prowess of Zhao fist

Get on stage now!

Now that you've had a taste of Zhao fist

Let me apply some medicine for you

This is because he loves you

You were born with asthma

so you can't take the vigorous training

Your desire to learn martial arts

Is it purely to strengthen your body?

No, I want revenge!

I want Zhao Jian to know the prowess of our family

Child, the most powerful aspect of martial arts

is not to defeat others

But to control your own desires

Virtue and morality must not be forgotten

Not to go out causing trouble un-necessarily

Discuss this Fearless script with the community: