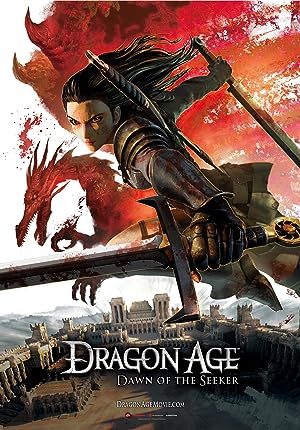 Synopsis: In the land of Orlais, where battles are fought with swords and magic, a young heroine rises as templars, mages, and dragons clash. Cassandra, a brash and beautiful Seeker, must stop a conspiracy that threatens the realm's most powerful religious order, the Chantry of Andraste. Accused of treasonous crimes and hunted by friend and foe, Cassandra must clear her name and overcome her raging emotions in order to save the day and take her place in legend.
Genre: Action, Adventure, Animation
Director(s): Fumihiko Sori
Actors: Colleen Clinkenbeard, J. Michael Tatum, Chuck Huber, R. Bruce Elliott
Production: Electronic Arts
2 nominations.

They call it the Dragon Age...

a time of political strife,

but also a time of faith...

faith in the Chantry of Andraste,

by her holiness, the Divine...

harsh control over the Mages,

practice of the arcane

to unleash a blight upon the world...

The most dangerous of these are

the Blood Mages who continue

to perform their dark rituals in secret...

in defiance of the Chantry.

this threat at any cost,

more brutal and their suspicions rise,

even extending to the

as the leadership sees their role shift

from control and protection...

As tensions boil within the Chantry,

the balance of power has been maintained

by the Seekers, the finest

and most loyal of the Templars

Handpicked by the Divine herself...

these defenders of truth root out

corruption, wherever it may be found,

be it from rogue Mages, or within

the halls of the Chantry itself.

"Gathering of the Faithful" looms,

and pilgrims from all corners

of the world journey

to pray for peace...

A peace that those in the

shadows are plotting to shatter.

A new era for Mages everywhere is about to begin!

Now, Avexis, the time has come to join our cause.

Don't let your fury run away with you again.

Trust in the Maker.

It's useless to resist, Avexis.

If she drinks any more, it will kill her..

I will decide when she's had enough. Is that understood?!

Enough, Cassandra! Gather your wits. We have work to do.

That's right! Come on! Come and get me!

Release the girl and submit!

You're from one of the dragon-hunting clans.

However, your report also raises many concerns.

To think this is all happening so close to the Ten Year Gathering...

Surely it is not a coincidence.

So you managed to bring back a little Blood Mage girl?

Avexis is not a Blood Mage, Your Grace.

She was taken from the Circle of Magi.

It's true. She went missing from the Circle a few weeks ago.

Presumably kidnapped. We've been searching for her since.

I am most grateful for her rescue, High Seeker.

We will come for her soon.

She was the focus of the ritual,

and is obviously vital to whatever

the Blood Mages are planning.

She will remain in my custody

until we get to the bottom of this.

Did the Seekers really bring down a drake?

Yes, Your Reverence. It was Cassandra.

You are to be commended

for your exceptional bravery.

I would expect nothing

You honor us, Grand Cleric.

We are proud to serve the Chantry.

You have my praise as well, High Seeker.

by your loyal order.

However, it seems rather

reckless to risk your

Perhaps if you shared your intelligence,

my Templars could better assist you.

There are times when stealth and