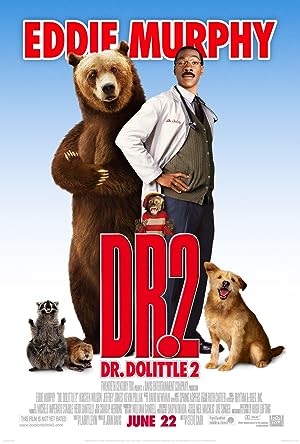 Synopsis: Dr. John Dolittle the beloved doctor is back, but this time around he plays cupid to bumbling circus bear Archie as he's so smitten by a Pacific Western bear female, Ava. Dr. Dolittle must help a group of forest creatures to save their forest. But with the aid of his mangy, madcap animal friends, Dr. Dolittle must teach Archie the ways of true romance in time to save his species and his home before their habit is gone. So John held a meeting for every animal in the forest to not give up without a fight no matter what kind of animal expression they have and everyone agrees to do it and save their home.
Genre: Comedy, Family, Fantasy
Director(s): Steve Carr
Actors: Eddie Murphy, Kristen Wilson, Raven-Symoné, Kyla Pratt
Production: 20th Century Fox
3 wins & 6 nominations.

Welcome to San Francisco,|the city by the bay.

My name is Lucky. I'm a dog, in case you|hadn't guessed, and I belong to this man.

You remember Dr Dolittle, right?|The guy who can talk to animals?

If you don't, let me jog your memory.|He's a doctor and he talks to animals.

Anyways, he's busier than ever.

And, Lucky, stop mixing up my charts.|Last week I almost neutered Mr Panitch.

From what I hear,|you'd be doing Mrs Panitch a favour.

Any time, ladies. Thank you.

No matter how busy he got,|Doc always found time to help animals.

I know how hard it is the first time.|Take your time.

That's right. Never give up hope, Bandit.|And notjust Bandit. All you dogs, listen.

Every dog in here can find a family|and be somebody's best friend.

Let me hear you say that.|Say: I am somebody's best friend.

- I am somebody's best friend.|- One more time:

I am somebody's best friend!

Also, there's a family in North Beach|trying to find a good watchdog.

Somebody house-broken and great with kids.|Anyone got a background in security?

That'd be Rusty. Rusty's a watchdog.

Every zoo in the country had a job for him. He|was especially good at matters of the heart.

How long's it been|since you made baby turtles?

Not that long, maybe 20 years.

It'll be 48 years next Monday.

OK, I see the problem.|Listen, I'm gonna give you these pills.

In fact, he became an international celebrity,|travelling from Alaska to Australia.

Now, what we're gonna do is sneak up on|and rescue this unsuspecting alligator.

The trick with catching this alligator|is to be wary of those teeth...

Hey, Dolittle, see what I'm doing is allowing|Steve to think I don't know he's back there...

...wait until he tries to grab me, turn on him|and, Bob's your uncle, bite his arm off!

I'm gonna have to get|my arm round his neck...

It seemed everybody wanted a piece of|the good doctor, and his family understood.

But we'll get to that part in a minute.|Right now I gotta answer the door.

Come on. Get it? Role reversal.

Cos usually it's the human...

Hugh John Lofting (14 January 1886 – 26 September 1947) was a British author, trained as a civil engineer, who created the character of Doctor Dolittle, one of the classics of children's literature. Doctor Dolittle first appeared in the author's illustrated letters to his children, written from the trenches while serving in the British Army during World War I. more…

Discuss this Dr. Dolittle 2 script with the community: