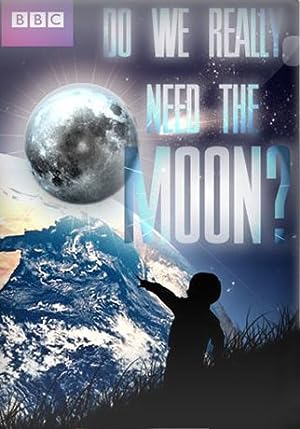 Synopsis: Through an immersive combination of footage, photos and 3D CGI, this documentary reveals how different the Earth might be if the moon wasn't exactly where it is now. How does a rock ...
Genre: Documentary
Director(s): Tim Lambert
Actors: Maggie Aderin-Pocock, David Criswell, Gary Lofgren, Russet J. McMillan

There are many moons in the solar system, but none like ours.

It exerts an extraordinary influence on Planet Earth,

keeping our world in balance.

But why is it so powerful?

I want to explore the relationship we have with our closest neighbour,

to see how the Moon has sculpted our planet and shaped our evolution.

Without the Moon, would we even be here?

'I'm a space scientist and a lunar fanatic.

'I've always been mad about the Moon,

'convinced it plays a huge role in our lives.'

in the night sky, a quarter of a million miles away.

In this film I'm taking nothing for granted.

I'm going to find out what would happen if the Moon wasn't where it is now.

What if the Moon was in a different position,

closer or further away?

How different would our world be?

The Moon is a ball of rock out in space,

but it has the power to create great tides here on Earth.

This is Loch Etive on the west coast of Scotland.

Twice a day, the Moon drags 66 million tonnes of sea water through this loch.

The head of the loch is like a bottleneck.

Water is funnelled through a very narrow channel.

And for an hour or two, this becomes one of the wildest, wettest rides in the world.

These are the Falls of Lora.

That's what the locals call them.

because as the tidal waters rush out of the loch, it gets very, very loud!

Kayakers come from all across the world to take the challenge of these waters.

But they have to paddle like mad just to keep up.

Even our outboard engine is struggling with the flow.

This is what the power of the Moon looks like up close.

My love affair with the Moon began as a child.

# I wish I was a spaceman

I took my first steps as Neil Armstrong took his giant leap.

Of course I was too young to know what was going on.

But the images became seared in my mind.

From an early age, I wanted to go to the Moon.

At school I struggled because I'm dyslexic.

But then I discovered science, and something clicked.

I wanted to become a scientist.

And sure enough, today I build satellites.

It's a mix of engineering and physics and I love it.

But now that I'm a space scientist, hardly anyone is talking about the Moon any more.

It used to be the new frontier,

I'm still mad about the Moon,

not just because I want to be an astronaut and go there one day.

I'm mad about the Moon because the more I find out about it,

the more extraordinary it seems.

The way its presence can conjure up this torrent of water,

And how does it do this?

With the help of gravity.

Gravity is a great universal force of attraction.

It keeps us firmly in our place on Earth

and keeps the Moon in orbit around us.

But while the Earth is attracting the Moon,

the Moon is also attracting the Earth,

pulling at our oceans.

So I have a set of scales, a metal block and a powerful little magnet.

You see, the force of gravity is very similar to magnetism.

They're both forces of attraction.

If I put the metal block on the scales,

When I put the magnet in and nudge it closer,

the block appears to weigh less.

You can see the needle moving.

That's because the magnet is attracting the metal towards it,

pulling it upwards, off the scales.

And that's what the Moon's doing.

It's pulling on the oceans, moving them upwards, away from the surface of the Earth.