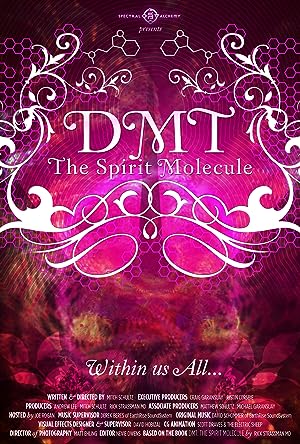 Synopsis: The Spirit Molecule investigates dimethyltryptamine (DMT), an endogenous psychoactive compound, which exists in humans and numerous species of plants and animals. The documentary traces Dr. Rick Strassman's government-sanctioned, human DMT research and its many trials, tribulations, and inconceivable realizations. A closer examination of DMT's effects through the lens of two traditionally opposed concepts, science and spirituality, The Spirit Molecule explores the connections between cutting-edge neuroscience, quantum physics, and human spirituality. Strassman's research, and the experiences of the human test subjects before, during, and after the intense clinical trials, raises many intriguing questions. A variety of experts voice their unique thoughts and experiences with DMT within their respective fields. As Strassman's story unfolds, the contributors weigh in on his remarkable theories, including the synthesis of DMT in our brain's pineal gland, its link to near-death & alien-abdu
Genre: Documentary
Director(s): Mitch Schultz
Actors: Joe Rogan, Ralph Abraham, Joel Bakst, Steven Barker

I saw this city in the deep deep distance, it was dark green

and there were many lights flickering and clouds flowing over it.

And all this started after a tremendous geometric patterns

that are incredibly rapid that

You cannot it describe it to anybody, they are so fast

After this slown down I saw this city in the deep distance.

So I was sort of watching that and then that ball of light got right pass me, right in front of me, like

"What was that?" It didn't scare me except it was so close.

and you're going "Why am I in this place?"

and then I noticed there is this woman off to my right with a real long nose, green skin

on the city in the distance.

This is the story of "DMT" or dimethyltryptamine.

A simple compound found throghout nature which has

One of the things besides what it does, one of things about DMT that

that always fascinated me was the fact that it is such a simple molecule.

If actually you look at the ring structure of DMT itself

will only have really four positions you can attach things to.

So, you can make diethyl, dipropyl, there are some other types of carbon change you can attach to that end

that do give you compounds that have activity, but very different from DMT.

Well, tryptophan is an amino acid and it's everywhere.

and these enzymes are very ancient enzymes, the're all over the place, they are a gem part of basic metabolism.

So, theoretically, anything could synthesize DMT.

but so far nobody knows why it's there! Or what its function is.

That is a 64 billion dollars question.

Why is DMT in our bodies? Why is it in plants, all sorts of mammals?

What is the role it plays in humans?

The conventional wisdom 30, 40 years ago was that

a physiological noise. That's a very naive understanding and

what we now understand is that these secondary compounds are,

in a sense, the language of plants.

These are 'messenger' molecules.

This is what plants use to mediate their relationships with other organisms in the environment.

Why is it that human beings' actual nervous systems

are wired to receive this experience?

Must be, that a, you know, there's important information to be learned.

So I don't think it's universally present in nature by accident.

It has a real function, we have co-evolved with these plants.

There is a purpose in it and a meaning to it.

So it really fits in with the notion, that DMT may be the common

Resonant language among all living beings on this planet

and maybe others as well.

I can't think of a more powerful tool

to explore the whole question of: What is consciousness?

These substances are tools that can be used

to expand awareness in all areas of life and

apply that expanded awareness for the betterment

of people's lifes, communities and families and all society.